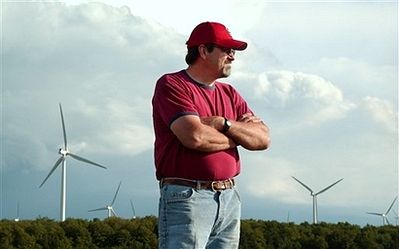 The following article describes the impact of the wind plant on the people of the Tug Hill plateau (Lowville, NY).  It appeared in Yahoo News, 8-16-08, by Helen O’Neill of the Associated Press.  RiverCityMalone thinks it’s worth reading.  The Editor.

“Listen,” John Yancey says, leaning against his truck in a field outside his home.

The rhythmic whoosh, whoosh, whoosh of wind turbines echoes through the air. Sleek and white, their long propeller blades rotate in formation, like some otherworldly dance of spindly-armed aliens swaying across the land.

Yancey stares at them, his face contorted in anger and pain.