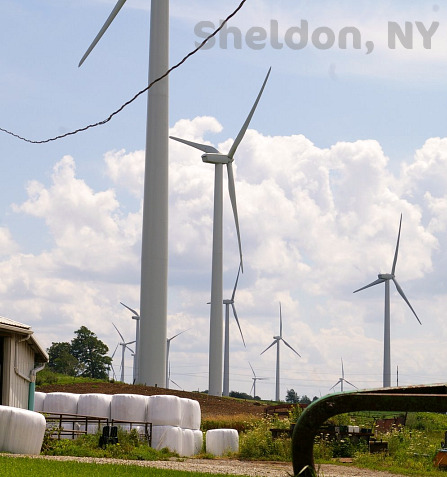 Editor: The following letter was written 10/30/09 by Sheldon, NY, Town Councilman Glenn Cramer, responding to a letter (click here) by a Cape Vincent landowner trying to sell his town on industrial wind turbines.

I read your article on a proposed wind farm and your reference to Sheldon, NY.  I am a Town Board Member in Sheldon and have participated in the process for the last four years.  [Editor:  Click here for a copy of the High Sheldon Wind Farm Draft Environmental Impact Statement.]  Yes, our wind project is up and running.  Yes, it does pay the town tax.  However, it does not pay the fire department tax and there are no surplus funds.

I would compare my relationship with the wind developer to a relationship with the Devil himself.  The town is hopelessly divided.  Landowners hosting turbines are even questioning whether they have made the correct choice.  TV and radio reception was destroyed in most areas of the town.  Also, the Buffalo doppler radar can no longer forecast weather conditions accurately in locations east of our wind farm.

The first house has just sold that was directly related to turbine concerns, and for much less than the owner wanted for it.  He was told by his realtor to take the offer, as it would be the best he could get.  He complained of rattling windows, shadow flicker and an unending “thump, thumping” sound from the nearby turbines.  He also stated that his children couldn’t sleep through most nights.

A poor Sheldon Town Law, designed by the wind company, states that the turbine sounds should not exceed 50dBA at the property line.  That did sound reasonable at the time.  Then we find out that one house is reporting 70dBA at it owner’s residence.  However, this is not violation of the law as it was written (at the property line), and now the wind farm is grandfathered and there is no recourse against them even if the law were rewritten.  Turbine location is very critical, as the sound travels at unpredicted distances and it is delivered by the wind.

Sound is a huge concern to many people living near these turbines.  But, vibrations are another emerging problem.  Turbines secured into the bedrock can pose a problem for neighbors and animals.  One man told me that he could feel the turbines as he lay on the ground in his driveway and worked on the family car.

I wouldn’t use Sheldon as an example of a successful wind farm.  It is another example of why industrial wind farms do not belong anywhere near people.  When someone from Sheldon supports the wind farm, ask him or her what he or she stands to gain financially from it.  I think you will see a direct relationship.  Some residents have gained from the wind farm, but it has been at the expense of their neighbors.