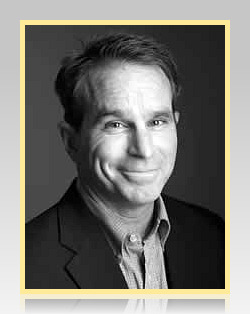 Once you’ve carpeted the wilderness with wind-farm turbines, and crushed any guilt about the birds you’re about to kill, prepare to be underwhelmed and underpowered.

Al Gore has a dream, a dream increasingly shared, according to opinion surveys, by people all over the world. It is that the 19th century, the age of steam and iron and coal, will finally end and that, as Mr. Gore wrote in an article for the New York Times in 2008, the time will soon come for “21st-century technologies that use fuel that is free forever: the sun, the wind and the natural heat of the earth.”

It might be better, and much more realistic, says Robert Bryce in “Power Hungry,” to imagine our journey toward a “green” energy Arcadia in units of Saudi Arabia. “Over the past few years,” he writes, “we have repeatedly been told that we should quit using hydrocarbons. Fine. Global daily hydrocarbon use is about 200 million barrels of oil equivalent, or about 23.5 Saudi Arabias per day. Thus, if the world’s policy makers really want to quit using carbon-based fuels, then we will need to find the energy equivalent of 23.5 Saudi Arabias every day, and all of that energy must be carbon free.”

“Power Hungry” unfolds as a brutal, brilliant exploration of this profoundly deluded quest, from fingers-in-the-ears “la-la-la-ing” at the mention of nuclear power to the illusion that we are rapidly running out of oil or that we can turn to biomass for salvation: Since it takes 10,000 tons of wood to produce one megawatt of electricity, for instance, the U.S. will be chopping down forests faster than it can grow them.

Mr. Bryce also points to the link between cheap power and economic productivity and asks why we should expect much of the world to forgo the benefits of light bulbs and regular energy when we enjoy these privileges. But if “Power Hungry” sounds like a supercharged polemic, its shocks are delivered with forensic skill and narrative aplomb. 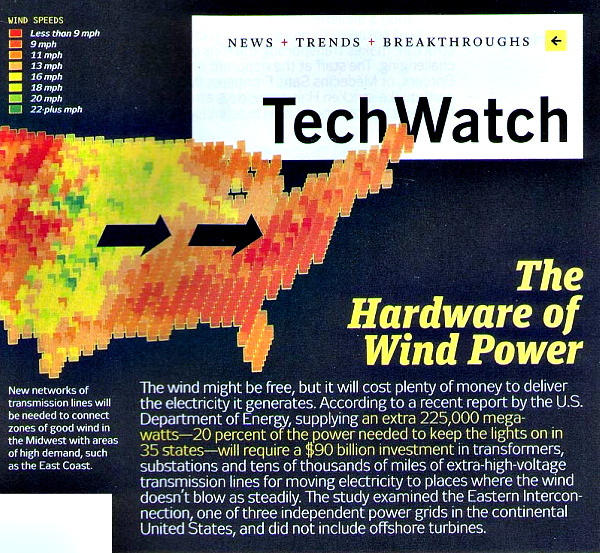 From Popular Mechanics, with appreciation.  (This illustration did not appear in the WSJ book review.)

So you want to build a wind farm? OK, Mr. Bryce says, to start you’ll need 45 times the land mass of a nuclear power station to produce a comparable amount of power; and because you are in the middle of nowhere you’ll also need hundreds of miles of high-voltage lines to get the energy to your customers. This “energy sprawl” of giant turbines and pylons will require far greater amounts of concrete and steel than conventional power plants—figure on anywhere from 870 to 956 cubic feet of concrete per megawatt of electricity and 460 tons of steel (32 times more concrete and 139 times as much steel as a gas-fired plant). 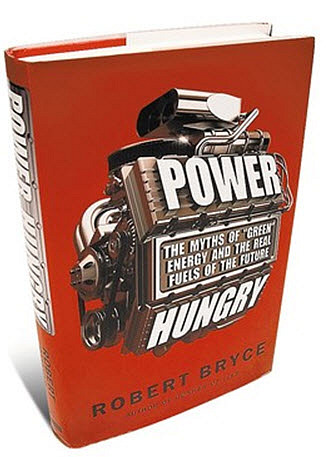 Once you’ve carpeted your tract of wilderness with turbines and gotten over any guilt you might feel about the thousands of birds you’re about to kill, prepare to be underwhelmed and underpowered. Look at Texas, Mr. Bryce says: It ranks sixth in the world in total wind-power production capacity, and it has been hailed as a model for renewable energy and green jobs by Republicans and Democrats alike. And yet, according to the Electric Reliability Council of Texas, which runs the state’s electricity grid, just “8.7 percent of the installed wind capability can be counted on as dependable capacity during the peak demand period.” The wind may blow in Texas, but, sadly, it doesn’t blow much when it is most needed—in summer. The net result is that just 1% of the state’s reliable energy needs comes from wind.

If using a huge amount of real estate to generate a tiny amount of energy from an intermittent energy source sounds deranged, consider, too, that we haven’t yet found the holy grail for storing wind-generated energy. Wind is either an instant energy snack or a famine. It must be used when it’s there or immediately replaced when it isn’t.

But if you are managing an energy grid, you have to meet constant demand or face blackouts, which means that you will have to have conventional power plants to back up the wind farms. As Jing Yang reported in The Wall Street Journal last year, this strategy is precisely the one that China is pursuing, adding in one province alone the coal-fired equivalent of Hungary. These plants, Mr. Bryce notes, are designed to run continuously and will in all likelihood “be run continuously in order to assure that the regional power grid doesn’t go dark.” The irony of wind power is that it “doesn’t displace power plants, it only adds to them.”

It is not for nothing, then, that the scientist and ur-environmentalist James Lovelock (the author of the Gaia theory of holistic planet-nurturing) now thinks that wind power and renewable energy are “rotten ideas.” What is arguably worse are rotten ideas that no one is allowed to criticize: Last year, Britain’s minister for climate change, Ed Miliband, declared that the British government had to make opposition to wind power “socially unacceptable.” There are more than 200 groups opposed to wind farms in Britain on the grounds that the turbines disfigure the landscape, thrum like air-conditioning units and, when the sun sets, create an irritating flicker-light for miles.

“Power Hungry” is a bracing attempt to call this kind of revolution to account, literally, by asking us to look at the math and to face the numbers. It is unsentimental, unsparing and impassioned; and, if you’ll excuse the pun, it is precisely the kind of journalism we need to hold truth to power.

Mr. Butterworth is editor of STATS.org and a columnist for Forbes.com.