Timothy Chase lives in Chateaugay in a house with big fat liens on it.  And I warn you right now this is going to be a sad story and if you don’t like sad stories stop reading right now.

No one in Franklin County was more “clean green renewable” than Turbine Tim.

Then the Noble Power Bomb dropped.

This past week Tim had another letter in the Telegram.  Quarreling with the news that Noble hadn’t paid a contractor’s bill, whereupon the contractor slapped a beefy lien on two or three farms in Chateaugay.  (Alas, this was only the beginning of the “rain of liens.”) 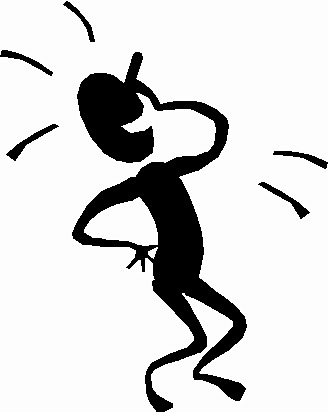 Don’t worry, he reassured, “these liens are obviously the result of a dispute between Noble Power and the contractor over work that was completed or not completed.”  In other words, Noble had a beef with the work that was done (more likely, not done), and told these bozos to stuff it.

Joke joke joke.  End of story.  (He even posted the letter twice, just in case we didn’t hear him the first time.)

(We pause for a suspenseful moment.  In fact, let’s go outside for a smoke.  Let me say—mind if I bum a cigarette?—that for years I’ve been convinced irony is one of the immutable and basic ingredients of the universe, along with gravity and space-time.  The Greeks seemed to think so, too.  They called it hubris, and were certain the gods took a dim view of it.) 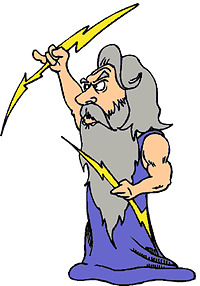 Even as the ink was drying on Tim’s letter, an attorney named Cynthia Ludwig was sealing with a kiss three liens against Tim Chase’s properties.

“Our vision is to be a leading supplier of clean, renewable energy from environmentally responsible facilities that will be a source of pride and benefits to the communities in which they are located.”  That’s from Noble’s mission statement.

A source of pride and benefits to the communities in which they are located.  Really?  Looks to me more like this: 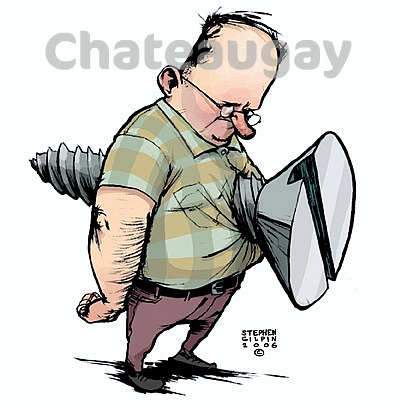 With appreciation to Stephen Gilpin

It’s not just Tim and Ellen Chase.  And it’s not just the 2 or 3 people named in the first Telegram article.  As the Telegram pointed out yesterday, there are 45 of these unfortunates.  Click here to see all 45 liens—and see if you’re included.

(Note to leaseholders in Franklin County:  Forty-four of the 45 liens posted, above, arrived in the County Clerk’s office Tuesday 3/24/09 en masse.  As a block.  Figure this is merely the first wave.  Contractors have, by law, till sometime this summer to file liens.  You might want to check at the courthouse from time to time, to see how big is that ball and chain bolted to your house.)

Anyone wanna find Noble?  Just follow the trail of liens. 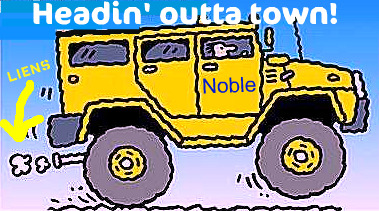 (A note to Connie Jenkins, Editor of the Telegram, whom I suspect would pin Noble’s misfortunes on the bad economy, just as she blames cash-strapped Frank Cositore’s Flanagan problems on the bum economy.  No, Connie, you’re wrong; these people are the bad economy.  They are the reason the economy crashed and burned.)

It’s called gambling.  Noble found eager gambling partners in big deregulated Wall Street banks, and between them they began “chasing phantom fortunes at the Wall Street card tables, like a dissolute nobleman gambling away the family estate in the waning days of the British Empire” (Rolling Stone Magazine).

Underlying the glamorous new world of finance was the process of securitization. Loans no longer stayed with the lender. Instead, they were sold on to others, who sliced, diced and puréed individual debts to synthesize new assets. Subprime mortgages, credit card debts, car loans—all went into the financial system’s juicer. Out the other end, supposedly, came sweet-tasting AAA investments. And financial wizards were lavishly rewarded for overseeing the process.

But the wizards were frauds, whether they knew it or not, and their magic turned out to be no more than a collection of cheap stage tricks. Above all, the key promise of securitization—that it would make the financial system more robust by spreading risk more widely—turned out to be a lie. Banks used securitization to increase their risk, not reduce it, and in the process they made the economy more, not less, vulnerable to financial disruption.

Sooner or later, things were bound to go wrong, and eventually they did. Bear Stearns failed; Lehman failed; but most of all, securitization failed.  (Paul Krugman, “The Market Mystique,” NY Times 3/27/09)

A bubble.  Noble Environmental’s bubble burst.  These liens—a multitude of them—are what’s left.  I have no doubt Noble is hoping to reconstitute its bubble under the Obama administration.  See “Wobbly wind sector sets sights on stimulus” (NY Times 3/30/09).  The success of that gambit remains to be seen.

Tim, my friend, I think you’ll agree this is more than a dispute between Noble and a contractor or two.  This is a company systematically stiffing contractors around the country.  And you’re left holding the bag. 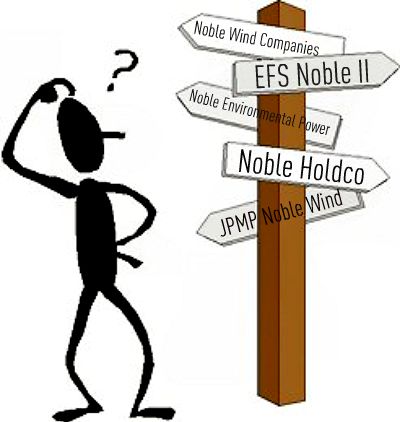 Ever wonder why Noble sliced and diced itself into an infinity of LLC’s?  And what are the assets of each LLC, anyhow?

Chances are the assets of each LLC are close to zero, which of course was the whole point of forming them in the first place.

My guess is that Noble owns essentially nothing, having leased the white trucks, the trailers, the yellow Hummer, the office furniture—the whole shebang.

My guess is Noble doesn’t have the proverbial pot to piss in, and never did.

The contractors at this point don’t care a lot; what they have, Tim, is you.  You have become Noble’s default bond.  Your property = Noble’s security deposit when Noble skips out on the rent (as it were).

This is one of the 15 reasons why Noble didn’t offer to buy anyone’s land:  Why on earth would it want to do that?  Much better that you own the land, so you are responsible for Noble’s bills.

The contractors know you have land and a house, and they know where that land and house are, and they now have a legal claim to both.  That’s what the liens are about.  And should you and your wife try to get a loan or, say, second mortgage to send your kid to college, or to buy or pay for whatever—you’re in trouble.

But you know this already.  This is one of the reasons why AG Andrew Cuomo set up the statewide wind ethics task force.  We are fortunate to have DA Derek Champagne sitting on that committee.  I’m sure Derek is keenly aware of these liens.

Tim, I am not your adversary.  Nor do I take pleasure in these liens.  Yes, I suspected from the start that Noble was less than it claimed to be.  Many of us pointed this out to your town board and the IDA’s (see Martin to Clinton County IDA 5/23/06).  But I’m not going to flog you over this.

You have believed in renewable energy.  I have, too.  After all, I’m an intelligent man, as you are.  The diabolical thing about renewable energy—any energy source, for that matter—is that it comes with baggage.  Sometimes huge & scary baggage.

Wind energy, in my research, comes with more problems than it’s worth.  Nuclear used to have huge problems.  My understanding of nuclear is that many countries have solved the more egregious problems of nuclear, including recycling of spent uranium (witness France).

Back to Big Wind.  I don’t think these turbines belong in people’s backyards.  That’s been my position all along.  And if your backyard abuts my backyard, and you put ’em in your backyard, then by definition they’re in mine, as well.  I suspect you and I would disagree endlessly on this point, so we’ll just drop it.

Noble’s shameless behavior is an altogether different matter.  Whether you’re a fan of Big Wind or not (I am not), it’s clear that systematically ripping off contractors around the country is despicable.  I would be despicable, too, if I didn’t pay my bills.  There is no reasonable or acceptable excuse for this.  Period.

I am sorry for this.  I am sorry that a dream and a hope and goodwill held by many people, including you and your wife, should be soiled by Noble’s behavior.

Like you, I hope Noble pays its bills someday.  And I hope those liens are removed from your property.  And I hope wind energy turns out to be all you wish it would be—and I’m not being sarcastic.  I mean this.  I am not your critic, Tim.  Yes, I am Noble’s critic, but not yours.  Like countless other people, you acted in good faith, only to see it scorned.  This is not something to gloat over; this is something to break one’s heart.