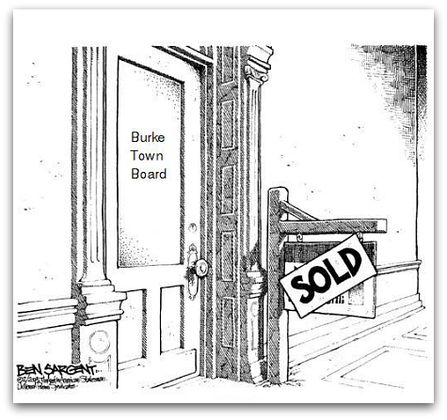 You asked me to clarify my statement that the Burke town board violated the public’s right of participation at the board’s “work session” on 3/25/08. I have attached the relevant laws and opinions, taken from NYS Open Meetings Law and the NYS Town Manual (2006 ed.)

To begin with, a “work session” is a creation of town governments; it is not provided for in NYS statutory law. Article 4 of NYS Town Law lays out provisions for running town “meetings”; it says nothing about “work sessions.”

Hence, all work sessions are by definition town meetings.

Here we encounter a sticky wicket, as the saying goes: NYS Town Law “is silent with respect to public participation. While it has been advised that a public body [town board] does not have to allow the public to speak, many [town boards] choose to permit public participation” (see, “Can I speak at a meeting?” Committee on Open Government website, NYS Dept. of State).

However, context is everything, including of course in the law. NYS law operates within the larger realm of the US Constitution, Article 1: “Congress shall make no law … abridging the freedom of speech, … or the right of the people peaceably to … petition the Government for a redress of grievances.”  (Hold onto this paragraph; I’ll come back to it in a moment.)

“No municipal officer … shall … receive, or enter into any agreement, express or implied, for compensation for services to be rendered in relation to any matter before any municipal agency of which he is an officer” §805(c).

“No municipal officer … shall … receive, or enter into any agreement, express or implied, for compensation for services to be rendered in relation to any matter before any agency of his municipality, whereby his compensation is to be dependent or contingent upon any action by such agency with respect to such matter” §805(d).

The question evidently troubling a good many people in Burke is how to reconcile these two clauses with the fact that two board members, Mr. Arnold Lobdell and Mr. David Vincent, have personal contracts (filed in the Franklin County Courthouse) with the wind developers.  (See attached.)

Is this not a case of two municipal officers “receiving or entering into an agreement, express or implied [with the wind companies], for [personal financial] compensation for services to be rendered [presumably a “yes” vote] in relation to a matter before a municipal agency of which they are officers [whether the Burke town board should permit industrial wind factories], whereby their compensation [monies paid to them by the wind developers for erecting turbines on their land] is to be dependent or contingent upon an action [passage of a pro-wind law] by such agency [the Burke town board] with respect to such matter”?

Or am I misreading NYS law?  If so, then a lot of people in Burke are likewise misreading the law, and clarification by you or the Department of State would settle the matter.  Without that clarification it’s hard to see how one reconciles clauses §805(c)&(d) with the two attached leases.

Back to the Burke town meeting of 3/25/08.  There were scores of people in the Burke town hall that evening who were there to petition the town board “for a redress of grievances” (Article 1, US Constitution)—the widespread grievance circulating throughout Burke that clauses §805(c)&(d) of NYS General Municipal Law are being violated by those two leases and by the Code of Ethics being discussed at that very meeting by the town board.

Let’s focus on that Code of Ethics for a moment (attached).  It’s cleverly, if not cunningly, worded.  (One would expect nothing less, composed as it was by the law firm representing Noble Environmental for the past several years.)  It’s not surprising that people in Burke say they detect the fingerprints of the wind developers all over their Code of Ethics.

Looking at that Code of Ethics, everything hinges on the tricky word “Contract” (see Definitions, p. 1).  A “Contract,” according to this definition, includes an “application to the Town … for any permit or permission.”  So far, so good—except that the wind developers are not applying to the town for a permit or permission to do anything.  The currently proposed wind law is not a result of an application for a permit or permission; it is merely a case of the town, of its own volition, passing an ordinance (wind law) to regulate any and all wind turbine development within Burke.  In addition, whereas “Exceptions to Code of Ethics Requirements,” 4-h, would at first appear to “grandfather in” Mr. Lobdell’s contract with the wind developer (on file in the courthouse), on closer inspection it seems this “grandfather” clause has no bearing on Mr. Lobdell’s contract (or Mr. Vincent’s, for that matter).

I believe this is what many of the people at the Burke “work session” (3/25/08) intended to bring to the attention of their town.  When they discovered their customary right to speak was gagged by order of the town board at the meeting’s outset, they immediately shifted to their Constitutional right to speak under the First Amendment:  “no law … abridging the freedom of speech … or the right of the people peaceably to … petition the Government for a redress of grievances.”  The grievance being, “We the People of Burke believe the proposed  Code of Ethics is illegal.”  Keep in mind that these people were attending a public meeting whose announced purpose was to discuss adoption of a Code of Ethics which, many believe, violates NYS General Municipal Law, §805(c)&(d).

Or does it?  This question lies at the core of the standoff in Burke:  Does the proposed Code of Ethics violate the law?

Right here the US Constitution kicks in in yet another dimension. It kicks in because you, Derek, are too overwhelmed to get immediately involved and, moreover, you doubt the enforcement of NYS General Municipal Law is within your jurisdiction. (I’m merely reiterating what you have said all along.) Second, the Constitution kicks in because nobody in the NYS Dept. of State, the Comptroller’s Office, the Attorney General’s Office, or the NYS Association of Towns is paying attention to Burke’s dilemma. They all pass the proverbial buck.

Graphing this situation would look something like this: District Attorney <> Attorney General <> Dept. of State <> State Comptroller <> Association of Towns, where the <> symbol stands for “passing the buck.” Don’t misunderstand me: they all have good reasons for passing the buck; nevertheless, as Noble’s Chuck Hinckley likes to say, at the end of the day the buck has been successfully passed. The best advice the buck passers can give the residents of Burke is: “file a civil suit.” This being yet another strategy for passing the buck. Why? Because (1) §805(c)&(d) is statutory State law, (2) it appears to be straightforward to hundreds of people in Burke, and (3) all that’s required is enforcement.

Enforcement: the golden word in this dialogue. DA <> AG <> Dept. of State <> State Comptroller <> Association of Towns says to the 300 people of Burke who have signed a petition stating their belief that town board members are breaking NYS Gen. Mun. Law: “We, the above buck passers, don’t have time or the staff to enforce the law, so it is incumbent on you people to hire an attorney and march into court to perform, hopefully, the job we are derelict in performing.”

More or less, this is what they’re being told. Let us call a spade a spade, after all.

The 300 signatories in Burke know the stakes are high. Very high. Despite the wind developers’ assertions that property values remain unaffected by giant turbines in everyone’s backyard, facts prove otherwise, and are proving otherwise in Burke as I write these words. Despite the wind developers’ assertions that there are no disastrous health effects from these 400-foot-high noise/vibration machines in everyone’s backyard, facts prove otherwise, as Dr. Pierpont’s 80-page forthcoming clinical article amply demonstrates.  (Not to mention, literally innumerable reports from people living next door to industrial turbines—around the globe.)

The 300 signatories to that petition know this; they know they’re being lied to by the pretty young men whom the wind developers hire to do their business. The 300 signatories are desperate, and rightly so. There is a high likelihood that, at Wednesday’s town meeting (April 2nd), the Burke town board will perform a double-header: (1) pass a doubtful Code of Ethics and, with this in its pocket, (2) pass its pro-wind law (attached, with attention to p. 13).

Back to the “work session” of 3/25/08. Given this state of affairs, and finding themselves gagged by what many in the room consider to be a scofflaw town board (whose disregard for the law, they feel, is effectively condoned by all of the above state agencies), it’s not surprising the representatives of those 300 signatories were outraged. At the start of that meeting, they all stood, faced the American flag, and dutifully recited the Pledge of Allegiance—“and to the Republic for which it stands.” The Republic that was created by the Constitution; the Republic which is nothing without the Constitution.

This is the second golden word in this dialogue: the Constitution. When all else fails—and all else has failed (refer to the buck-passing chain above), as far as these people are concerned—then it’s time to resort to the Bill of Rights: the inalienable right to “freedom of speech … [and] the right of the people peaceably to … petition the Government for a redress of grievances.”  Starting with their town government—except that Constitutional right was denied them on 3/25/o8.

When is a government dysfunctional?  The Burke town board desperately needs definitive guidance from the state—not the town lawyer who may have his own conflict of interest, but from the state, either in the form of you, as District Attorney, or the Dept. of State, or State Comptroller, or Assoc. of Towns, or Attorney General.  This is not the time to pass the buck.  Misters Lobdell and Vincent, both honorable men, need your guidance.  Supervisor Darrel Bushey needs your guidance.  They don’t appear to be getting it.

On the other side of the dispute, the 300 signatories (and growing) to that petition need your guidance.  They don’t appear to be getting it, either.

Meanwhile, the chasm grows wider and gets uglier.  Neighbor against neighbor.  Friend against friend.  A community fracturing and shattering.

My question to you, as senior law enforcement officer for Franklin County, is this:  Is the NYS government dysfunctional in this matter?

This is a monumental tragedy for the community of Burke.

I write this in an effort to be fair-minded to both sides in this dispute—an honest dispute that urgently requires resolution by the State of New York.  Not by State Troopers arresting people at the next town meeting, but resolution by you, I suggest, as chief law enforcement officer for the county.

I write this letter with admiration and respect for you in the difficult job of being District Attorney.  In fact I write it precisely because I consider you to be one of the most conscientious, diligent, vigilant, and exemplary district attorneys in the state.  (Let me know when you decide to run for State Attorney General.  You’ve got my vote.)

Anyhow, this is how I interpret the Burke uproar.  Not unlike the ComLinks uproar, it requires a skilled umpire.  Pronto.  Probably before the town meeting on 4/2/08.  The two critical words at that meeting will be enforcement and Constitution.

I believe that’s where you come in.