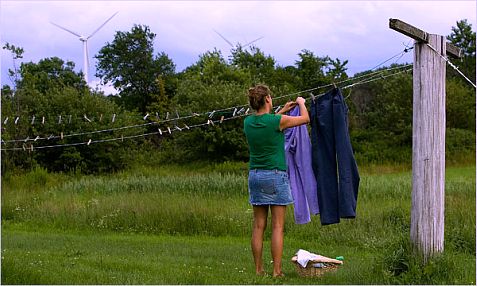 The following article appeared in the NY Times 8-17-08, written by Nicholas Confessore. RiverCityMalone thinks it’s worth reading.  The Editor.

BURKE, N.Y.–Everywhere that Janet and Ken Tacy looked, the wind companies had been there first.

Dozens of people in their small town had already signed lease options that would allow wind towers on their properties. Two Burke Town Board members had signed private leases even as they negotiated with the companies to establish a zoning law to permit the towers. A third board member, the Tacys said, bragged about the commissions he would earn by selling concrete to build tower bases. And, the Tacys said, when they showed up at a Town Board meeting to complain, they were told to get lost.

“There were a couple of times when they told us to just shut up,” recalled Mr. Tacy, sitting in his kitchen on a recent evening.

Lured by state subsidies and buoyed by high oil prices, the wind industry has arrived in force in upstate New York, promising to bring jobs, tax revenue and cutting-edge energy to the long-struggling region. But in town after town, some residents say, the companies have delivered something else: an epidemic of corruption and intimidation, as they rush to acquire enough land to make the wind farms a reality.