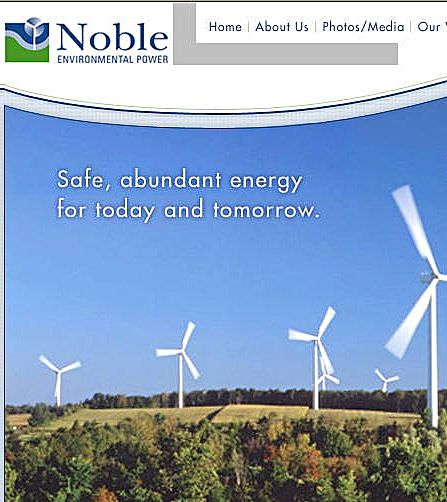 Noble Environmental Power is one of them.  (The other, UPC Wind, operates downstate.)  The investigation is based on months of research by the  Attorney General’s office, including a discreet visit to Malone by an Assistant Attorney General to interview town officers and other interested parties.

“The allegations include accusations that the companies improperly sought or obtained land-use agreements with public officials and the officials’ relatives and acquaintances; gave bribes and other improper benefits to public officials; and entered into anti-competitive agreements or practices…. A Cuomo spokesman added that the two subpoenas are just the beginning.  ‘This is an initial part of an ongoing investigation,’ said spokesman John Milgrim” (The Buffalo News, 7/16/08, p. A2).

The impetus for this statewide investigation (which, by the way, is the first of its kind in the nation) came from right here, by golly—from Franklin County District Attorney Derek Champagne, responding to voluminous complaints that the wind developers were not playing by the rules.  Readers of this page will recall an article we did this spring, “Where the Buck Stops,” which began with:

Last week, District Attorney Derek Champagne forcefully stepped into the vacuum of government control over conflicts of interest between municipal officers and the wind developers. Up till then, every single NYS agency had been passing the buck about enforcing NYS General Municipal Law (GML) against (obvious) conflicts of interest.

And ended with this:

Meanwhile, while this story plays out, mark this date on your calendar, April 2, 2008. The day the buck stopped with District Attorney Derek Champagne. The day “clean, green, renewable” wind energy moved from town hall to county courthouse—where, tragically, it belongs.  It is said History repeats itself.  Enron’s hubris drove it into corruption, then court, then jail.

RiverCityMalone applauds Mr. Champagne for initiating this inquiry and getting the AG involved.  The word “applause” is not enough; we’re talking, folks, about one damn good DA.  This took uncommon vision and determination.  And lots of work.  The man deserves a ticker-tape parade.

All this is not to hang Noble.  One of the most critical institutions in America is due process before the law.  Let Noble have its day in court.  At the same time let the people of this state, through their attorney general, examine all the relevant evidence Noble has in its files.

Noble, for its part, has issued a press release promising full cooperation.  (This is of course standard from corporations that suddenly find themselves on the legal hot seat.  See Enron.)

Meanwhile, the turbines go up.  Daily.  Whether Noble’s turbines have been producing any electricity is a good question.  (Yes, they’ve been spinning, but that’s not the same as generating power.)  The Federal Energy Regulatory Commission (FERC) maintains a website (click here) whereon anyone can find out precisely how much electricity Noble’s windfarms are producing.  (Not just Noble and not just wind energy, but all producers of electricity throughout the country.)  FERC does not show any power generation for Noble’s windfarms through June 30, 2008.  This may be because the production figures are still being processed, or because there has been no power generated so far.  It’s unclear.

The full text of the AG’s press release follows.  Click here to read it on the AG’s website.

Allegations of Improper Dealings with Public Officials and Anti-Competitive Practices

Wind farms are clusters of large electricity-generating turbines powered by wind and connected to the electric grid.

Subpoenas were served on Newton, Massachusetts-based First Wind (formerly known as UPC Wind) and Essex, Connecticut-based Noble Environmental Power, LLC. They are part of an investigation into whether companies developing wind farms improperly sought or obtained land-use agreements with citizens and public officials; whether improper benefits were given to public officials to influence their actions, and whether they entered into anti-competitive agreements or practices.

In recent months, the Office of the Attorney General has received numerous complaints regarding the two companies from citizens, groups and public officials in eight counties alleging improper relations between the companies and local officials and other improper practices.

“The use of wind power, like all renewable energy sources, should be encouraged to help clean our air and end our reliance on fossil fuels,” said Attorney General Cuomo. “However, public integrity remains a top priority of my office and if dirty tricks are used to facilitate even clean-energy projects, my office will put a stop to it.”

The Attorney General’s subpoenas seek, among other things:

» All documents concerning any benefits conferred on any individual or entity in connection with wind farm activity.

» All agreements, easements or contracts with individuals regarding placement of wind turbines.

» Agreements between wind companies that may indicate anti-competitive practices.

» All documents pertaining to any payments or benefits received from local, state or federal agencies.

The investigation is being led by Assistant Attorney General Andrew Heffner of the Syracuse Regional Office under the supervision of Special Deputy Attorney General Ellen Biben, who oversees the Attorney General’s Public Integrity Bureau. Assisting in the case are Investigators Thomas Wolf, David Bruce and Andrea Burnham.