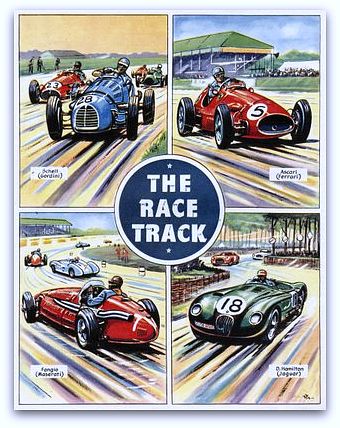 The Race Track.  It’s called the Malone International Raceway and Entertainment Park.  (MIREP, for short.)  Owned by former state police BCI officer John “Chick” Fountain.  Located next to the Market Barn and Bokie’s Drive-In.  Technically it’s in the Town of Malone, although literally it’s on the doorstep of the Village of Malone.  The racetrack was approved by the town in 1995 and did in fact operate for several years.  Then, for reasons we won’t explore here, it sat idle for years.

Now Mr. Fountain is back and intends to re-open it.  There is a special town meeting at 6 pm this Wednesday (July 2nd) at the town offices (Malone Dufort Airport) to discuss the terms of re-opening.  RiverCityMalone urges you to attend and ask some questions of the town board and Mr. Fountain.

One of the big questions being, of course, noise.  It seems Mr. Fountain’s speedway was built to race a class of car called a Legend.  “What’s a Legend,” you ask?  It’s one of these: 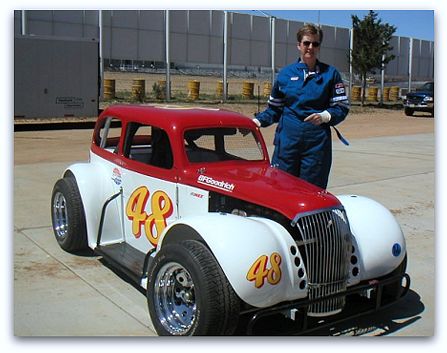 They’re cute.  Sort of.  Quoting from Wikipedia, Legends are “5/8-scale replicas of American automobiles from the 30’s and 40’s, powered by a Yamaha motorcycle engine…. The cars all run to the same specification, with the only variable (in theory) being the body style. They also have a lot more power than grip, which ensures exciting racing.”

Don’t be fooled; that’s a 1250 cc (sealed), 122 horsepower Yamaha motorcycle engine under that hood—and “quiet” it ain’t.  Especially when you experience the acoustic waste products of a score of them at full throttle. 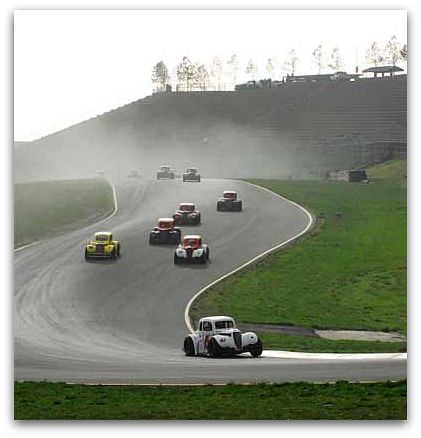 In 1995 Mr. Fountain and the town carried out a State Environmental Quality Review (SEQR) at considerable expense to both, to assess the racetrack’s full environmental footprint.  It’s available at the town office.  It runs to many hundreds of pages and occupies several banker’s boxes.  RiverCityMalone recently acquired the Noise section of the SEQR.  It looks impressive and, at 70 pages, has an impressive heft to it.  Lots of charts and graphs and yards of technical language.  (You need an advanced degree in physics to understand this thing.)  Anyhow, turn to p. 106 for the bottom line:

Analysis of the potential noise impact of this project required a complex and detailed noise study. This study has used a “worst case” situation. The model used a conservative approach (i.e., producing the largest potential impact) which, in all probability, will not be encountered at this facility. The analysis indicates that mitigative measures can be implemented to not only reduce, but essentially eliminate any significant impact. An effective monitoring plan has been developed and contingency methods have been developed. However, some small negative impact will occur. Inevitably, due to the project history and the small unavoidable impact, some “noise complaints” will be generated, but the projected increases are not considered significant and are within federal criteria and guidelines.

This was written by an outfit out of Canton, NY, calling itself Tisdel Associates.  In the preface to the Final Environmental Impact Statement Tisdel says Mr. Fountain bore the “majority of costs” for the report.  In other words, Mr. Fountain hired Tisdel to do an environmental impact study which concluded (among other things) that only “some small negative [noise] impact will occur.”

Now turn up your computer speakers and click here.  (Be careful not to turn ’em up too high.  You’ll get blown out of your chair.) 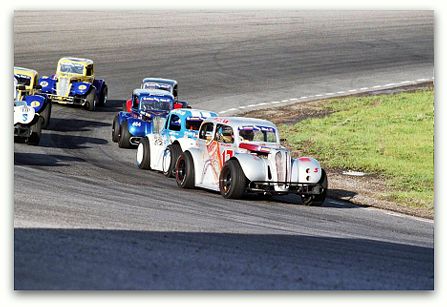 That roar you just listened to is a videotape of the “Sunny South Raceway Legend Car Race,” October 2007. On a short oval track, paved, comparable to Mr. Fountain’s. Notice the comments: “Don’t know a whole lot about these types of race cars, and this was the first time for me to see them race. I can say one thing, these little cars are some kind of loud when they’re out there on the track together. I’ll be bringing some earplugs next time I go.” And this from a racer: “I race these, they are some kinda loud inside too… but they are awesome!!!”

Some kinda loud indeed.  So much for Tisdel’s 70 pages of smoke and mirrors.

RiverCityMalone is told Mr. Fountain and his counsel (the redoutable Brian Stewart and Nathan Race) are endeavoring to “grandfather in” the changes he made to the speedway this past winter and spring.  (Isn’t Nathan Race the village lawyer, watching out for the Village of Malone’s best interests?)  Anyhow, the purpose of Wednesday’s meeting is to resolve this issue.  (Mr. Fountain’s racetrack in fact came up at last Wednesday’s town meeting, where tempers—in the true spirit of Legends racing—ran hot and loud.)

Tempers aside, RCM is merely interested in asking fair and straightforward questions of the board and Mr. Fountain:

» When does one person’s noise entertainment become acoustic abuse for those forced to listen to it?  How is a community supposed to resolve this dilemma?   (This is a question Malone needs to wrestle with regarding Boom-Box cars.)

» What will the racetrack do to village and town traffic volume and patterns, especially before and after races?

» What changes did Mr. Fountain make this past winter and spring to the original design of the track, grand-stands, and water & sewer access?  Were these modifications approved by the town board and code officer? 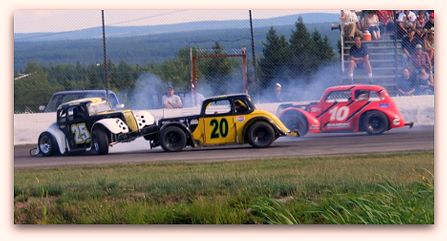 Meanwhile, while your speakers are turned up …

» Click here for “A lap at the start of a race around Mondello Park in Ireland.” This was recorded inside one of the race cars. Wet track. April 2008.

» Click here for Legend cars racing at Hurricane Racing, dirt track. May 2008. Either North or South Carolina, not clear which. Again, this is inside one of the race cars.

» Click here for Legend cars racing at the NorthPole Speedway (wherever that is), June 2008. Small, oval, paved track. Similar to Malone. 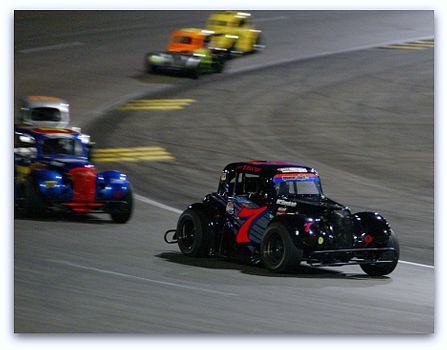