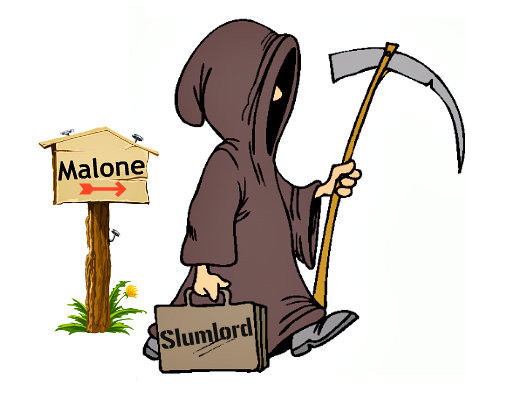 Have you noticed Malone is dying?  Our village has a malignant tumor.  We’re being devoured by a cancer killing us street by street, neighborhood by neighborhood. 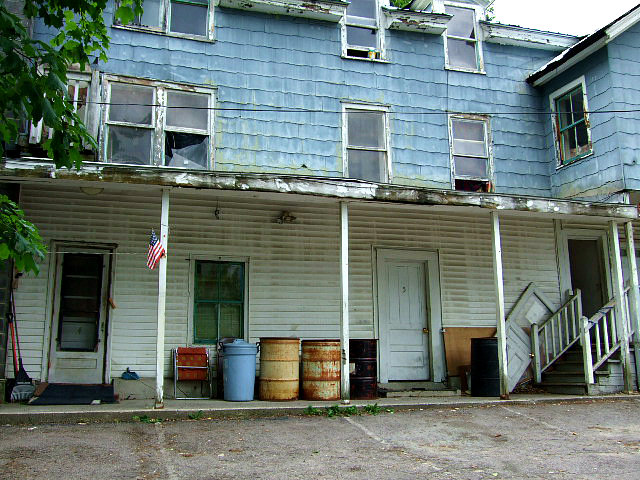 The above building is familiar to most of us.  It’s hard to miss.  It’s the Jack & Elvira Stewart rental property on the corner of Morton and E. Main Street.

I will come back to Jack & Elvira in a moment.  First let me say that Malone has many fine and responsible landlords.  Three have rental properties on my street—Pat Ward, Dennis Bannon, and the Greenos.  Rick Chapman, on Washington, is also a reputable landlord.  Gary Mageean comes to mind as does John Mills.

These people are not the problem.  The problem is people who either inherit or purchase distressed buildings which they pack with tenants and allow the building and grounds to go to hell.  I would venture to say these landlords are in the minority—perhaps only a handful or so of landlords.  Yet their impact on the village is disproportionate to their numbers; it’s huge and disastrous to the surrounding neighborhood.

I call it “death by slums.”

The slumlords of course are not the only reason for the “slumification” of Malone.  Witness the numerous empty, derelict, ramshackle buildings littering the village.  They seem to pop up like mushrooms in the night.  Yes, somebody owns them; however it’s nearly impossible to  track down the owner and get him (her) to fix the problem—a matter I will take up in Part Two of this series, where I focus on the currently dysfunctional Village Code Office.

That said, it’s one thing to be, say, an absentee owner of a decaying, unoccupied building.  That’s reprehensible enough.  It’s another to be running a “rental property” business where one’s buildings, and presumably the apartments within, are in appalling shape.  And it’s even more alarming when these ramshackle rentals are subsidized nearly entirely by tax dollars in the form of public assistance rent money.

Meet Jack and Elvira Stewart.  The Stewarts own 11 rental properties (soon to be 12), all of them dependent on public assistance rents.  Our tax dollars, in other words. 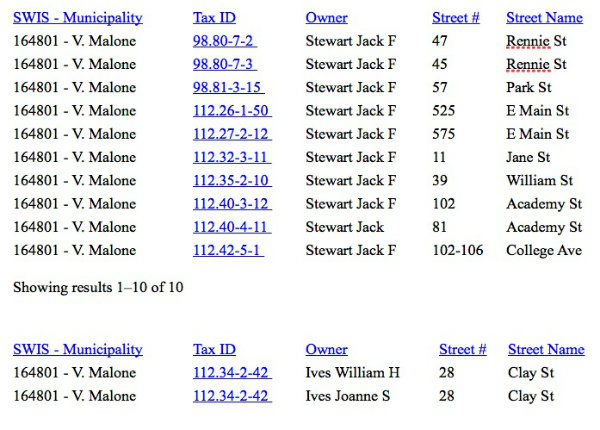 Take a look at what your tax dollars are “paying for” in the Stewart rental on the corner of Morton and E. Main (shown above).  You decide if this is a prudent and acceptable use of public money. 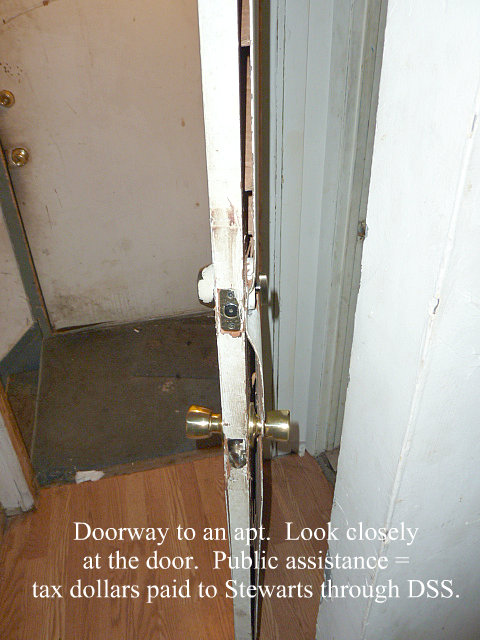 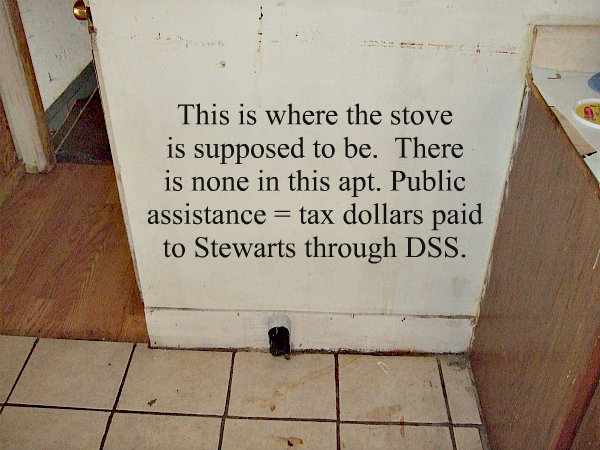 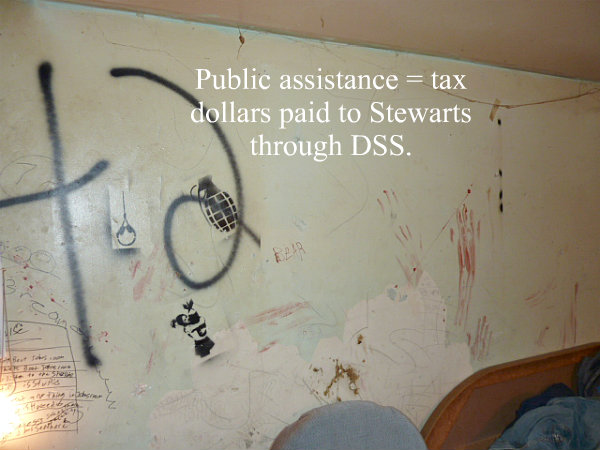 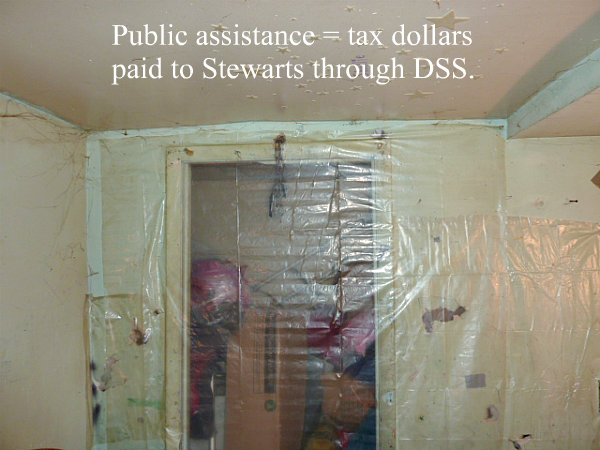 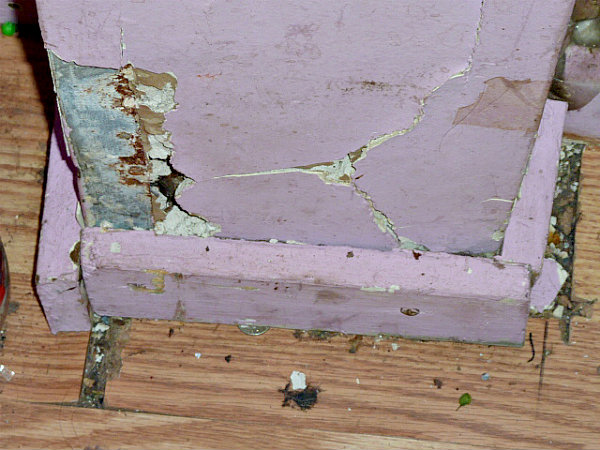 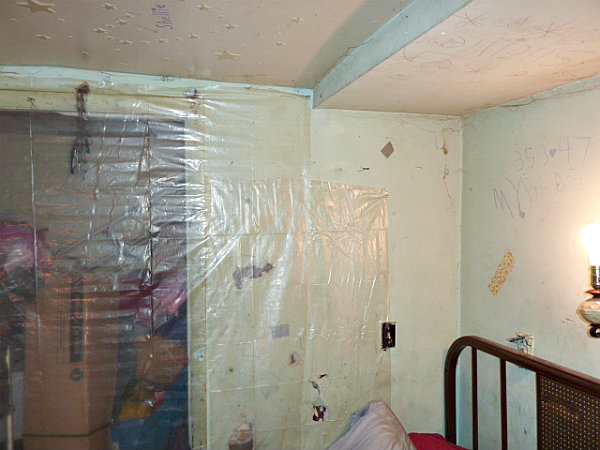 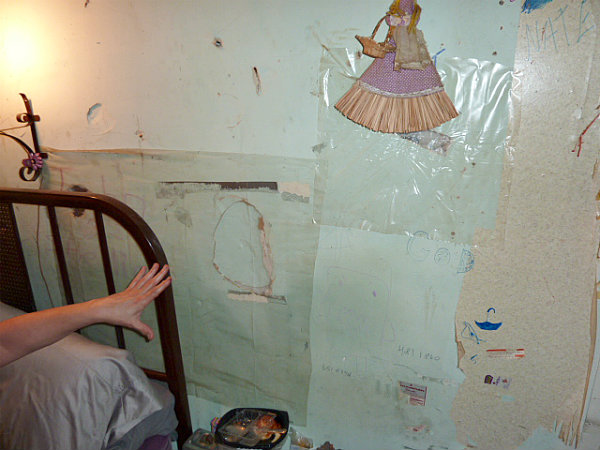 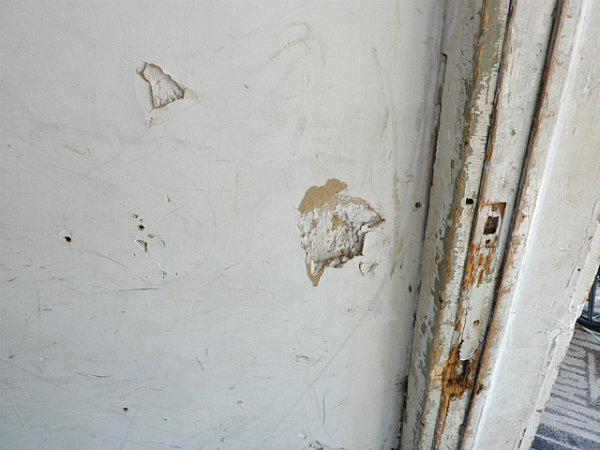 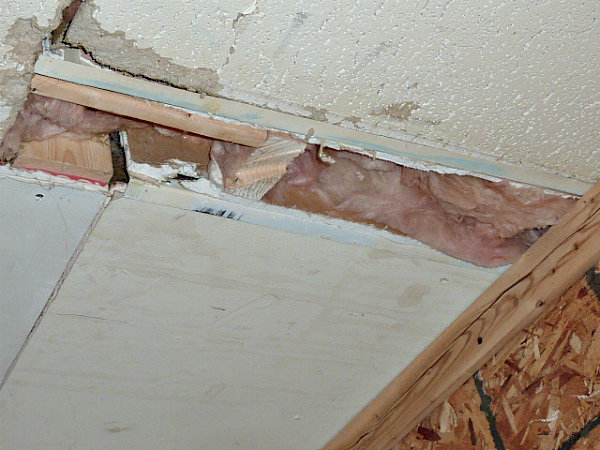 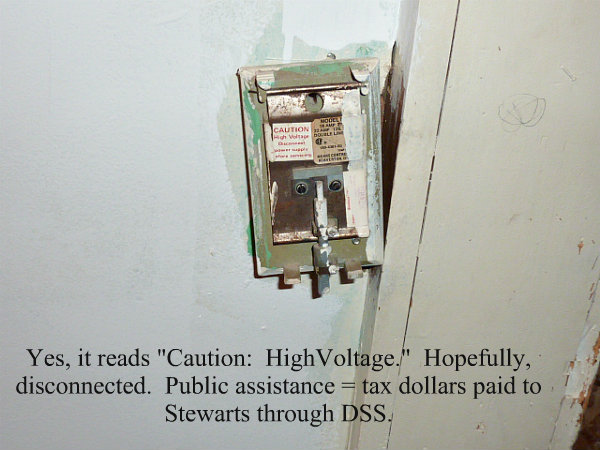 At least one of the above apartments rents for $500/month (excluding utilities).  (I assume the other one in the photos rents for a comparable sum.)

Need I point out that this is an outrage?  To put all this in perspective, that’s $500 of public assistance (taxpayer) money paying for an apartment that’s right out of the pages of a Charles Dickens novel.

Windows, broken and patched, with poles thrust out, on which to dry the linen that is never there; rooms so small, so filthy, so confined, that the air would seem to be too tainted even for the dirt and squalor which they shelter; wooden chambers thrusting themselves out above the mud and threatening to fall into it—as some have done; dirt-besmeared walls and decaying foundations, every repulsive lineament of poverty, every loathsome indication of filth, rot, and garbage: all these ornament the banks of Jacob’s Island (from Dickens, “Oliver Twist”).

Scholars have long agreed that slums breed despair, self-loathing, hopelessness, and even mental illness.  Over the centuries, a host of popular writers have concurred.  (I recommend Michael Harrington’s classic, “The Other America:  Poverty in the United States.”)

In Dickens’s time (Victorian England), slums were notorious breeding grounds for scourges like tuberculosis.  Now, in developed countries like America, infectious disease is not so much at issue; now the chief contagion spawned by slums—including Malone slums—is a disease of spirit, of will, of the heart.  The crippling, downward spiral named despair, hopelessness, and no exit.

A disease that rolls on, infecting generation upon generation. 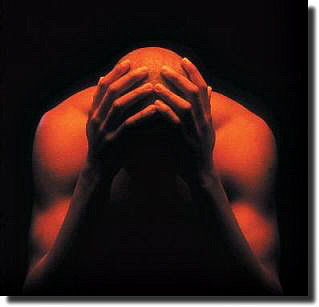 From this disease comes domestic violence, child abuse, self-abuse by any number of means, drug and alcohol abuse—a veritable culture and social class of bottomless abuse in a multitude of forms.  When Dante wrote the “Inferno,” he inscribed the following words over the entrance to Hell:  “Abandon all hope, you who enter here!”

Dante’s phrase could aptly describe Malone slums—slums that breed the people who walk up and down my street at all hours of the day and night, or stand on their porches, loudly flinging obscenities, vulgarities, and profanities at one another—oblivious to children, women, the elderly, and all the rest of us, as though their violent language and demeanor are perfectly acceptable.

I call this behavior “neighborhood terrorism” and I blame it on landlords who refuse to insist that tenants respect the tranquility, sanity, civility, and decency of our neighborhoods.  I lay blame, as well, at the feet of the very individuals who refuse to control their own behavior.  I lay blame, in addition, at the feet of Malone’s new, brazen “drug lords”—a subject I shall take up in a forthcoming series of articles.

In short, Malone’s slums are a nursery for a sub-culture of despair, violent language and behavior—and drugs. 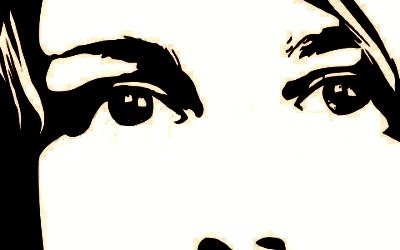 No, I don’t blame the Stewarts for all this, though I do insist that the largely unregulated and generally deplorable condition of their rentals contribute to this disaster.  And when you factor in that Franklin County Department of Social Services (DSS) pays the majority of rents in the Stewart buildings—that is, pays the rents from DSS funds, or SSI or SSD funds administered by DSS—it’s difficult to feel charitable toward either Stewarts or DSS.

As a community, we can do better than this.  We must do better than this.  Make no mistake, we’re not dealing with something as mundane as “apartment rentals” or with something as altruistic as “providing a social service”; we’re in fact dealing with systematic squalor, exploitation and, when it comes to the public agencies involved (Village Code Office and DSS), a violation of public trust and the public purse. 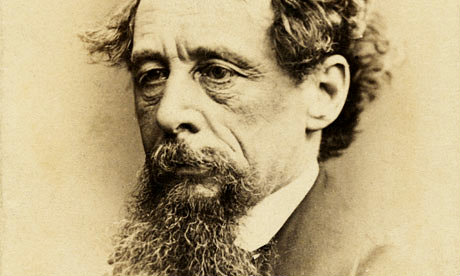 Through his prodigious literary talent coupled with perseverance and passion, Dickens managed to persuade parliament to pass legislation cleaning up London’s slums.  I am no Dickens, and my vehicle is not literature but photographs—photographs and my hereby appealing to the good graces of Jack & Elvira (whom I consider friends, though on this matter we disagree) and other landlords who perpetrate this upon our community.

I appeal, as well, to the Village Trustees, the Code Office, the Village Police, the Judges, and the Department of Social Services (DSS)—that each, within its sphere of jurisdiction, take the matter in hand.

So far I am encouraged.  I have made two presentations before the Village Board.  I am happy to say the Mayor and rest of the Village Trustees are on board with this.  Same with the Village Police and District Attorney and County Legislature.

This leaves the Village Code Office, Municipal Court, and Franklin County Dept. of Social Services (DSS)—all three of which will be the subject of Part Two, titled “Where’s the Code Officer?” 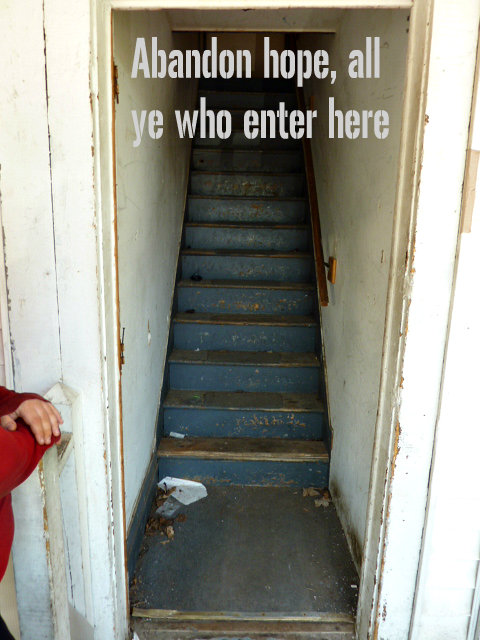 Before ending, it’s important you meet the person who calls the above photograph, “home.” 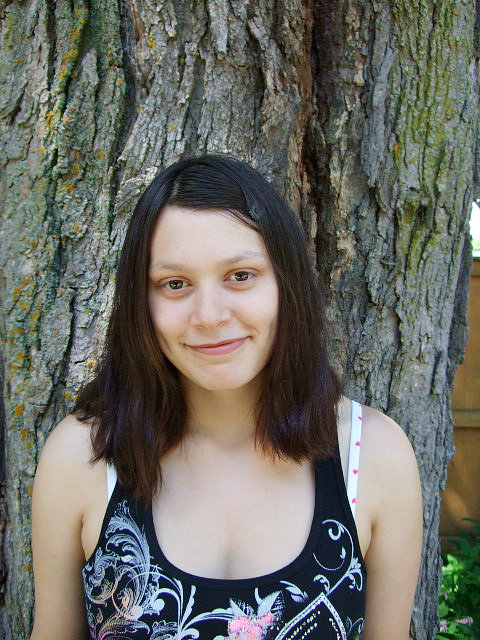 Her three children are forbidden by her caseworker to live with her, she tells me, because the apartment is considered neither safe nor adequate (no stove, after all) for children’s occupancy.

Now, take a deep breath:  Consider this young woman your daughter.  I consider her mine.  Jesus would do the same, would he not?  So would every other spiritual leader and teacher known to history.  Ladies and gentlemen, I submit that this is your daughter living here with her three kids—except the place is such a dump, they can’t live with her.  How does all this nurture her as a human being and mother?  How does all this feed her spirit and enable her to pass strength and stability and hope on to her children?

The answers are obvious and deeply troubling.  “Abandon all hope, you who enter here!”

A word of caution to Jack & Elvira, who I hope are reading this:

Every public welfare official shall have power to and may withhold the payment of any such rent in any case where he has knowledge that there exists or there is outstanding any violation of law in respect to the building containing the housing accommodations occupied by the person entitled to such assistance which is dangerous, hazardous or detrimental to life or health.

More on those violations of the Village Code and NYS Uniform Code, and the duties and powers of DSS, in Part Two, “Where’s the Code Officer?”

As a postscript, I was threatened with bodily harm by Jack Stewart on Saturday (6/16/12).  Click here to read the police report and my request for an order of protection.  Two observations are worth making.  Well, three:

(3) I will work with Jack & Elvira if they heed what I’ve written and shown (photos) above, and if they genuinely, honest-to-god seek to renovate their properties and homes so they offer public assistance tenants decent, respectable housing—decent and respectable by generally accepted standards, not by their personal (and legendary) living conditions.