As a biologist I am concerned about destruction of the live creatures of our planet.  As a combat veteran I hate wars, especially modern wars dominated by indiscriminate killing from afar, from the air, from battleships on the sea.  The federal government, cooperating with wealthy people who manage gigantic corporations, proclaims that it is “legal” to remove entire mountain tops to get at the coal; allow coal-fired power plants to operate with out-of-date anti-pollution devices; authorize thousands of methane wells in western states; and is now about to give the go-ahead to oil companies to drill arctic seas and shores.

Extremist moves like this destroy living conditions for plants and animals, The Others.  That is where the Endangered Species Act enters the scene.  (I’ll get to war in a moment.)

The Endangered Species Act, signed into law by president Richard Nixon, is the most revolutionary act since the Franklin Roosevelt era.  If carried out honestly and thoroughly, the act demands adequate living spaces for “endangered” plant and animal species. The result is that we humans actively share habitats with others, a resounding victory.

We don’t often hear about that victory.  Instead, we get denunciations of the ESA.  Perfectly natural, of course, given the way our society is structured.  Nearly all of us know that sharing is not found anywhere in the robotic instincts of huge corporatized conglomerates that dominate our lives.  These outfits are not like individual citizens, though they are served by individuals.  They are more like out-of-control mechanisms, allowing nothing to stand in the way of profit and the power to increase profit.

Bush’s Fish and Wildlife Service (Dept. of the Interior) has in the past 15 months not listed a single species as “endangered,” though there is a long list of species on the waiting list.  The Clinton administration didn’t do very well on that score either.  Let’s face it, somewhere along the line from 1776 governments turned from the welfare of the people to the welfare of corporations.

I don’t know if anyone involved in creating the Endangered Species Act realized what a revolutionary piece of paper they were bringing to life.  That law requires objective study, then mandates real action to restore or preserve living spaces until the at-risk species has fully recovered.

That is a huge order in our highly individualistic society.  Are we up to it?  I think so, if we can look a little deeper into what it means to be an American.

On the bright side, we humans need healthy habitats just as much as The Others.  We too are endangered—air, water and earth contaminated with strange cocktails of radiation and new chemicals never before experienced on planet Earth.  When these novel creations reach the complex ecosystems of our earth we have an incredibly hard time monitoring, or even discovering, the huge array of interactions.  There is so much we simply do not know!  Support and strengthening the ESA is essential for survival.

Support and strengthening the Peace Movement is just as essential for survival.  Think of it as a kind of Endangered Species Act. 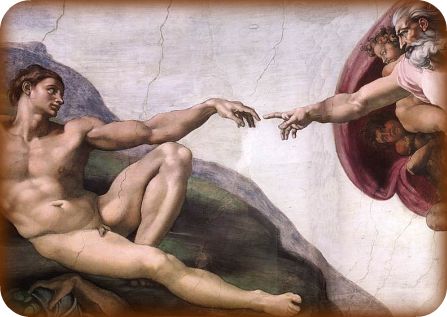 We all realize by now that struggles to control Iraq and Afghanistan are destructive, creating internal strife that our clumsy “from afar” firepower is unable to control, and that the entire operation is based on lies and evasions.

War deals death.  War sucks up billions and billions of dollars from our common treasury.  War drains resources, human and material, here at home.  We are feeling the pinch now, at both local and federal levels.  Agencies to deal with health care, infrastructure breakdown, increase of poverty, homelessness, rising unemployment, are starved, their budgets slashed.

So, who’s winning?  Nobody.  The chicken hawks might think they are winners, but their way is putting us on the fast track to the cliff’s edge. 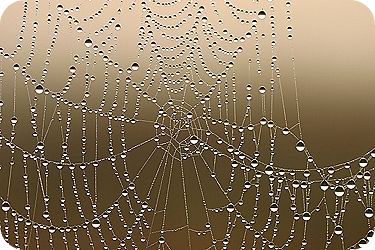 The fragile web of life we call Earth

Another burden for our hard-pressed citizens is the hatred directed at us from other parts of the world.  Our military bombed Serbia (under a democratic president), the invasions of Iraq were carried out by two Republican presidents, father and son.  These illegal acts accumulate.  They build hatred that is, very naturally, the breeding grounds of terror.

During the Clinton years and Bush years peace actions in our country have come in for heavy criticism from citizens who believe in peace, who are against war, but are frustrated at the slow pace of the various movements.  Criticism is necessary, of course.  It is a nurturing, high-calorie food.  But we also have to understand that movements take time to grow.  That’s troublesome, but also a fact.  It should not be taken as an excuse for despair.  We local Malone protesters keep looking for ways to involve more people, to get the talk going.

I think that right now the greatest danger to our country is the frantic search for a leader to make things right again.  We have forgotten a hard-earned lesson: governments are intertwined with gigantic conglomerates whose single aim is to grab ever more power.  They “green” themselves only as a public relations stunt that isn’t allowed to eat too far into profit.  These corporate creations are not like individuals, though individual humans serve them.  They have taken on a nature that is very much their own.  They will stop at nothing to promote their reason for being:  profit and power.

Look at Blackwater Corporation, unregulated, out of control, an extreme example of takeover of public tasks by private power.  Blackwater’s thousands of adventurers in Iraq are mercenaries protected by Blackwater managers, even if they panic and gun down Iraqi citizens.

We protesters do not like the imperial ambitions of our leaders and, if you have noticed our posters at the Veterans Park, we do not hide that dislike.  Yes, we are raging mad, but we take care to not block the sidewalks.  We welcome talk with other citizens and want to go further in that direction.  We are open to criticism, but disdain the few shouted obscenities and childish taunts from passing vehicles.

Extremism is another judgment passed on the Peace Movement, just as it has been passed on the Endangered Species Act.  Our answer:  the rulers and wannabe rulers are the extremists.  That small but powerful group preach bipartisanship and other civilized behaviors while standing firm on death-dealing militarism.

There are now no candidates in the presidential horse race who are staunch advocates of peace now, of bringing all troops home now.  The surviving contestants make vague statements, suggest that they will bring many of the troops home, redeploy them—but not until end of the year, or ten years, or a hundred years if necessary for “victory.”

Meanwhile, what happens to the poor who fled Hurricane Katrina?  What about climate change? 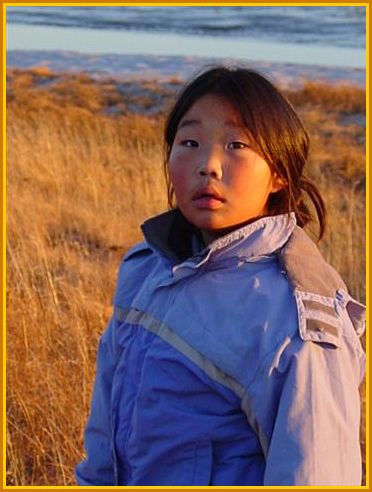 … the permafrost underpinning the Alaska
tundra, this girl’s homeland, is rapidly melting

We protesters are pretty well immune to vague rhetoric.  We are focused on what happens on the ground in Afghanistan and Iraq and other parts of the world where our people in power act like bullies in our name.

Our position is that we the people are the power that will have to step in to end the insanity of modern warfare.  In doing that we will be returning to the noble undercurrents of the United States of America, to actions that have moved mountains, staying stubbornly alive until goals are gained: abolition of slavery, women’s suffrage, the revolt against trusts and corporate profiteering, voting rights, affirmative action, getting out of Vietnam, the American Indian Movement.  These are just a few among many which could be named.

Within these movements are the makings of the American Dream.

Will the actions by thousands, millions, of American citizens to end wars be too late?  Nobody knows, but North Country demanders and deciders will keep on showing up in Watertown (Tenth Mountain territory), Saranac Lake, Plattsburgh, Potsdam, and Malone, to remind people that if you hate wars then you need to think about doing something about it.

*Editor’s note:  The author, Martin Murie, holds a Ph.D. degree in a zoology from the University of California at Berkeley and has been a professor of biology at various universities.  During World War II Dr. Murie fought with the original Tenth Mountain Division, now headquartered in Watertown.

His father and mother, Olaus and Mardy Murie, were celebrated conservationists.  Olaus became the first director of the Wilderness Society, and he and Mardy were the driving force behind the creation of the Arctic National Wildlife Refuge.  For further reading about this legendary American family visit the website of the Murie Center.

Martin and Alison Murie have been longtime residents of Brandon, where Martin, in his eighties, continues to publish articles and novels and, with Alison, campaign for peace.