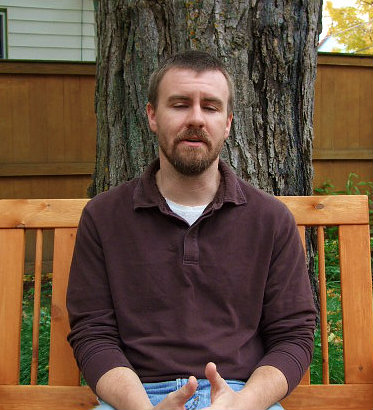 Does this man look worried to you?  (Notice the furrowed brow and hand gestures—a dead giveaway.)  In fact, he is worried.  And you should be, too!

That’s why he’s running for Malone Village Trustee—as a write-in candidate.  (More on the “write-in” procedure, below.) 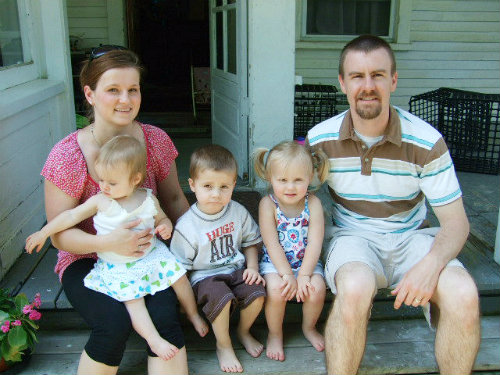 A year ago, Pat & Liz Ward bought a 3-unit rental house next door to me, on Clay St.  (They had been living on Francis St, across from the Middle School.)  They fixed it up and moved into one of the apartments.  For 8 months, Pat & Liz and their 3 kids were my next-door neighbors.  Fabulous neighbors!  Wonderful people!

They then bought another 3-unit rental house on the corner of Washington and Frederick, and did the same thing:  fixed up the vacant apartment and moved in.  Click here and scroll down to see the stunning job they did on this second apartment.  Meanwhile, they rented the apartment—which they had vacated next door to me—to a fine young couple. 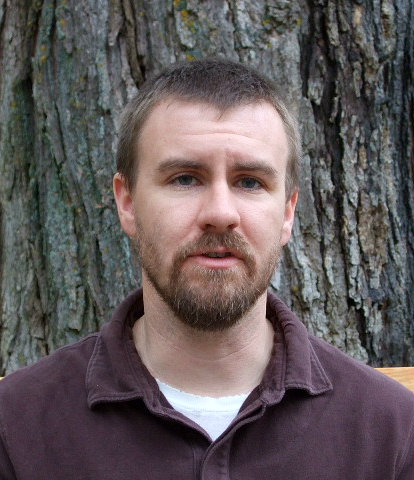 Through this process, the Wards and Martin/Pierponts became friends.

Patrick was Restaurant Operations Manager at Pizza Hut when he moved into the neighborhood.  Pizza Hut thrived during his tenure.  After buying the second apartment building (corner of Frederick & Washington), he resigned from Pizza Hut (with much regret from the staff, I’m told) to devote himself to buying-and-fixing-up distressed apartment buildings in the Village, then renting them out to decent tenants.

Now, savor everything I just said.  Patrick—ordained minister (see below) and businessman—and wife Liz (a trained schoolteacher) are the future of Malone.  Young, professional couple investing heavily in the Village’s future.  A young professional willing to run for public office (Village Trustee) and put in the hours and energy and sweat—and the homework—to rescue a Village headed for bankruptcy. 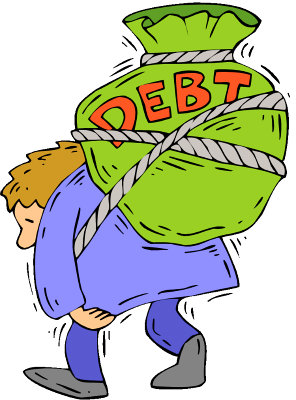 Bankruptcy?  The Village’s revenues (taxes and other, miscellaneous sources of income) are not keeping pace with expenditures.  What’s strangling the Village budget are:

(1) “Retirement benefits” to retired municipal employees.  Like all of us, municipal retirees are tending to live longer, meaning their benefits are being paid out to them and their spouses for more years than originally anticipated.

(2) The astronomical rise in fuel costs (gas & heating oil), electricity, insurance premiums, cost of new equipment (all manner of vehicles, office equipment), maintenance costs for municipal buildings, mandated training for staff, and so forth.  Bear in mind that the Village runs a water department and sewer department.  The costs of water and sewer service go up and up.  What we pay for water & sewer, quarterly, does not cover costs.

(3) Doubtless other costs which have not occurred to me.

Now consider that over the past 30-40 years the Village tax base has shrunk as the Village population has contracted—especially the “property tax-paying population” has contracted.  At the same time, businesses have tended to set up shop in the Town rather than the Village, often because there was more space available in the Town than Village.  For example, think of the K-Mart shopping plaza.  Or Walmart.  Or fast food restaurants.  All these need plenty of parking or “drive-thru” space.

The Village’s historic downtown simply does not lend itself to a Price Chopper or K-Mart or Radio Shack (not enough parking) or McDonald’s or Pizza Hut.  Moreover, once the West End of Main St began to sprout shopping malls and stores large and small, it had a magnet effect for other businesses to locate there. 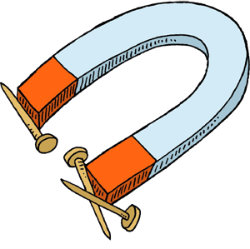 On the other hand, IBC has thrived and expanded—in the Village.  Same with pharmacies, several commercial printing presses, a major sign company, an office supply, car washes, insurance and architectural firms, several hardware stores (I include Midstate Industrial Supply), automotive stores, convenience stores, doctor’s and dentist’s offices, several restaurants, and of course Ellis Pontiac—probably the largest auto sales in the county.  Nor is this an exhaustive list.

All these Village businesses are taxable.  Even so, there is a large chunk of real estate which is non-taxable:  churches, government agencies, public schools, and so forth.  (I believe the hospital is not taxed, although I may be wrong in this.) 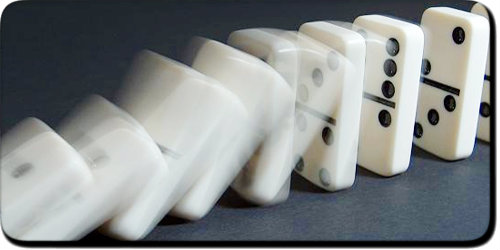 Each of these factors has an impact on Village tax revenues.  We’re dealing with a domino effect.  It’s important to grasp its dynamics, to avoid falling into the trap of looking for “villains” in this economic crisis.  Let me state forthrightly:  The police and Dept of Public Works (DPW) and Village Office staff are not to blame for this crisis.  (I am going to insist that we refrain from the “blame game,” altogether.)  The cops, DPW, and Village Office staff all did their jobs with distinction, and they all deserve our thanks.  That goes for those who are retired and those currently employed by the Village.

Turn on your tap.  Flush your toilet.  Dial 483-2424 when people are screaming obscenities outside your house.  Notice the sidewalks.  For that matter, notice the streets, summer and winter—including the “sanding” and snowplowing.  Notice streetlights.  Notice who picks up the leaves in the next 3 weeks—in fact, leaves and sticks and branches, year-round—and that dead trees get removed.  And when you smell smoke coming up from your basement, who do you call?

Now imagine all these taken-for-granted services have disappeared.  Or imagine they’ve been financially gutted to the point where for all intents and purposes they’re non-functional or barely effective.  Or they’re staffed by incompetents and fools and just plain nasty people.

I’m happy to report that, at the moment, my water and toilet still work extremely well (excellent water, by the way), the cops are outstanding officers who respond within minutes when someone is screaming obscenities on my street, the streetlights go on at night, sidewalks are intact and roads are repaired and plowed and sanded, my leaves will magically disappear in the next couple weeks, and fire engines & ambulance arrive in a heartbeat when I call 911. 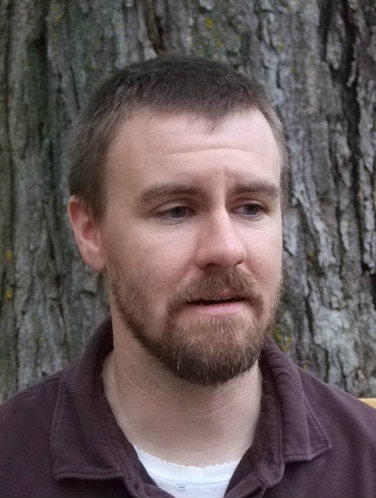 So what does all this have to do with Patrick Ward running for Village Trustee!  Pat and Liz are worried that,

Hmm, we’re spending all this money and ‘sweat equity’ on our properties—and we’re hoping the cops and Dept of Public Works and water & sewer continue to function smoothly, and the Code Office prevents our neighborhoods and Main Street from degenerating into slums, and taxes don’t become astronomical, and above all that we maintain a Village government whose sole focus is ensuring all these vital services and amenities continue to operate.”

Pat understands the “domino effect,” outlined above:  demographic shifts and changing economic realities in the retail sector, coupled with rising health care costs and other costs, result in diminishing tax revenues, which in turn make it difficult to maintain crucial services guaranteeing quality of life and safety for Village residents.  He’s worried that “Village dissolution” offers no guarantees that these critical services will continue, or will continue at a realistic and acceptable level of quality—as they are now.  Pat thinks shared services with the Town is essential—now, not tomorrow. 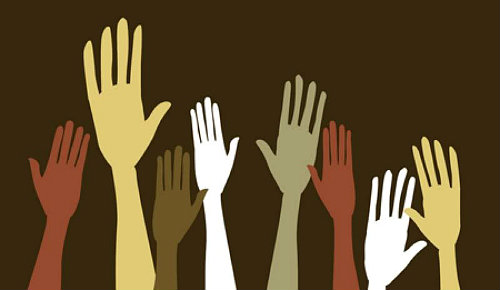 Hence, the problem isn’t, “Should the Village & Town share services?”  Nor is it, “Should the Village take down derelict buildings and houses and clean up slum housing by insisting that slumlords either clean up their act or go out of business, because they’re killing neighborhood spirit and property value?”  Mayor Todd LePine and Trustees Riccio, Hill, Marlow, and Maneely all answer, resoundingly, “Yes!” to the above questions.  So does every member of the Town Board.  And, no doubt, so do Brian Langdon and Tom Grady, both candidates for Village Trustee. 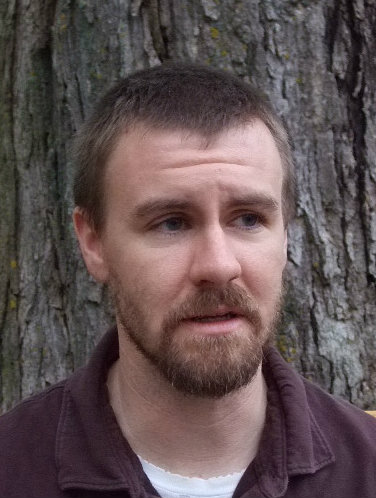 So, why vote for Patrick Ward instead of some other “write-in” candidate or Brian Langdon or Tom Grady?  Three reasons come readily to mind.

(2) Patrick has sunk his wealth, such as it is, into buying and renovating distressed homes in the Village. He then rents these beautifully renovated homes—as apartments—to people who he insists treat the homes and their neighborhoods with (what used to be) common courtesy and decency. No loud music, no junked cars, no violent behavior or language, no garbage-strewn yards, no drug dealing, etc.

(3) Patrick is a juggler, literally and figuratively. 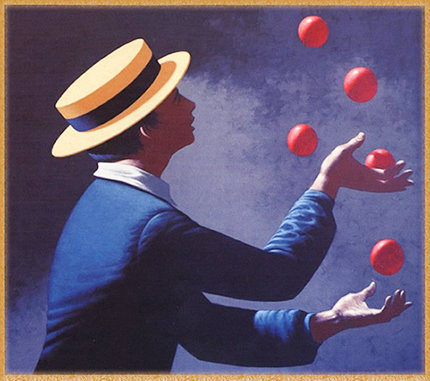 (a) As Restaurant Operations Manager (second in charge of the business, and one of only two full-time positions) at Pizza Hut on West Main St, he managed a staff (including input in hiring and firing), scheduling, inventory, budget, customer complaints, and breakdowns (both in equipment and employees) at a fast-paced restaurant with a huge income stream.  As a team-player he helped keep that income stream high.  He did this in the hardest economic climate America has witnessed in decades.  There’s a certain amount of risk involved in such an enterprise—and he and his team pulled it off.

(b) He’s also run a church or two—as pastor.  As I mentioned, above, he’s an ordained (Baptist) minister.  As pastor you’re dealing with personnel, with a congregation, with a budget, with dwindling and uncertain revenues, with competing interests and all manner of personalities, with a physical plant (called a “church building”)—and he pulled it off.

(c) Finally, he has thrown himself into the housing renovation business in Malone—a high risk venture, to be sure.  He has to juggle rental income with mortgages & other loans, house & property repairs and maintenance (he’s installing a brand new furnace in the house next to me, as you read these words)—and all the while he’s obliged to find financial backers for buying & fixing up yet more distressed homes, and then locating and maintaining good tenants.

I began by saying this man is worried.  How do I know?  He told me so.  “Pat,” I responded, “if you’re worried, then do something about it:  Run for Village Trustee!” 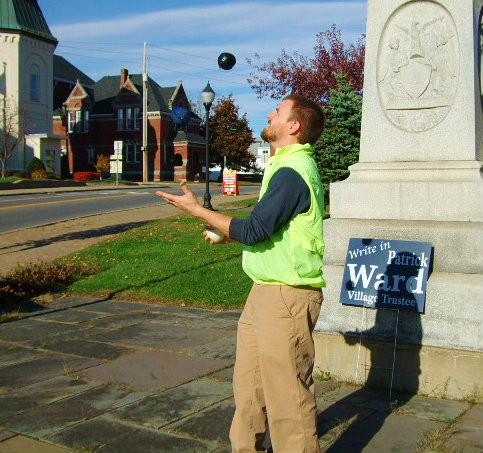 And RiverCityMalone supports him.  Because we’re worried, too. 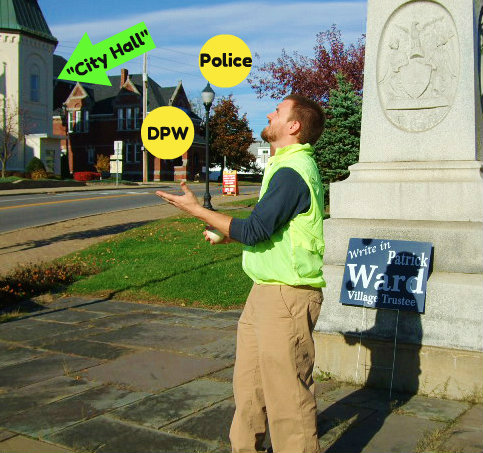 The problem is figuring out how to do it with the very real and ominous budget and revenue constraints outlined, above.

The immediate answer is the following.  (Other answers will present themselves as the process unfolds and we encounter unforeseen obstacles and challenges.  Nevertheless, we must begin the journey to solvency immediately.)

(3) Acting decisively, boldly, promptly, compassionately, responsibly and courageously while acknowledging that the status quo has to end—now. 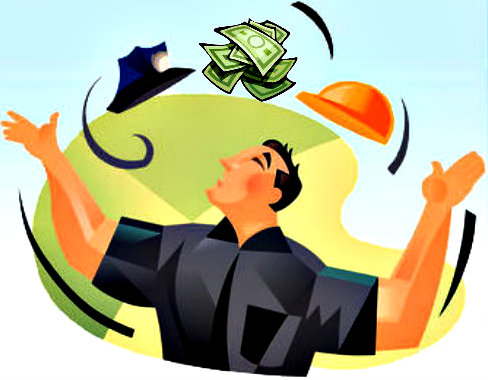 Let me add a fourth item to the above list:  We must be extremely cautious about whom we elect to take us on our new journey.  That’s why we’re asking you to “write-in” Patrick Ward as Village Trustee on November 6th.  (Remember, there are three people running for Village Trustee, but you can vote for only one.  Either Langdon, Grady, or Ward.) 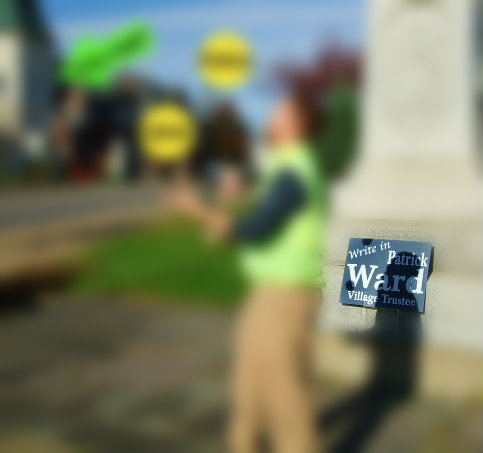 Here’s Patrick’s campaign flyer (click here), and here’s how to write him in:  In the “Write-In” box at the bottom of the column titled “Village Trustee,” write “Patrick Ward.”  (The Election Commissioners tell us there will be a pen or pencil in the voting booth for this purpose.)

Call him at 651-5980 or email him at [email protected].  This man is responsive and approachable.  (Don’t believe me?  Give it a try!  He’s traveling for the next week, helping another pastor move back to Georgia, but even in transit he’s reachable.) 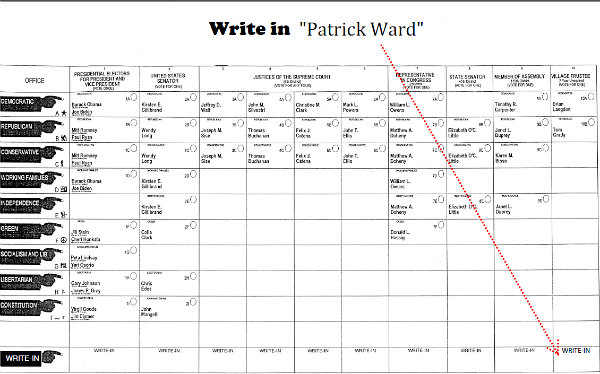 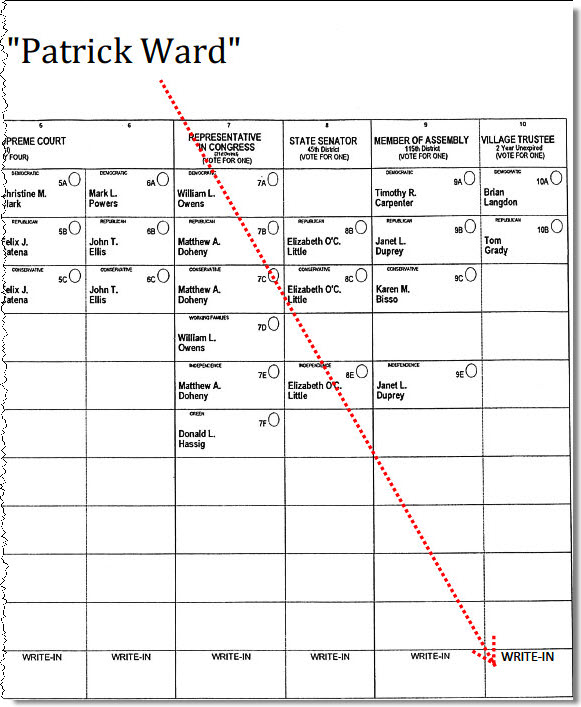 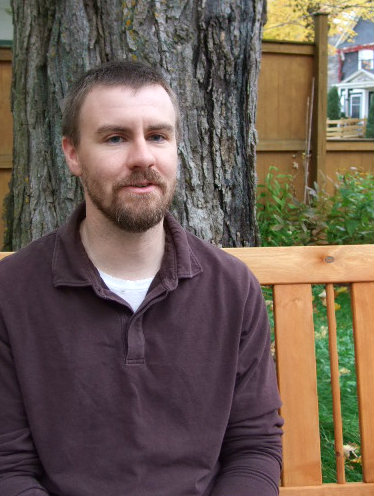