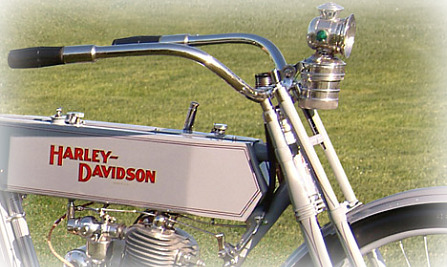 “The Silent Grey Fellow” (1909).  Good on gas. Good on global warming.
Find one.  Ride one. USA should manufacture them.  Creates jobs.

In his essay on “FDR and the Great Depression,” reprinted below, Russell Baker says, “Like Barack Obama seventy-six years later, he [Roosevelt] was succeeding a failed Republican president, and Americans had voted for change.”  I think it is important not to overlook the fact that Messiah Obama is also following a failed Democratic Congress.  (More pathetic ratings than Bush.  Surely the past two years were the worst.)

I sure as hell hope the worshippers remember to vote for change when those elections come around.

Change? “Hey Franks, is that money just for your Boston banker buddies?”

Change? “Hey Pelosi, you own $300,000 in Boone Pickens’s wind stock. Wonder how will you be voting regarding wind power?”

Change? When governments pick winners and losers in a capitalistc society, are we becoming the United Socialists of America?  Yeah, that’s change (Bush too).

Change? “Hey Hillary, how many millions for the Clinton Foundation came from the screwball countries that want us dead?” Thats right, you won’t answer that. “Don’t worry, there are no conflcits there!” See you in 2012.

And may we have a moment of silence, please, so we can remember the dead art of journalism. Never before have I witnessed a media that spends more time and effort being political activists than they do on reporting facts. Nobody reported on the unfolding of history; they manipulated and created it. We need to create a Sixth Estate to protect us from the Fifth Estate (which is supposed to be the media standing up to government status quo).

The only thing more dangerous than our corrupt government is media with an agenda.

First hundred days. How about the first hundred hours? I have buyer’s remorse. I will likely be judged a heretic for speaking out against The One, but in consideration of the fact that 46% of American voters didn’t pick him to lead us to the Promised Land, not everbody is all twinkle-toed and gleeful.

I pray for this leader. What fool would want him to fail? But he has been put so high on a pedestal, I fear he has nowhere to go but down.