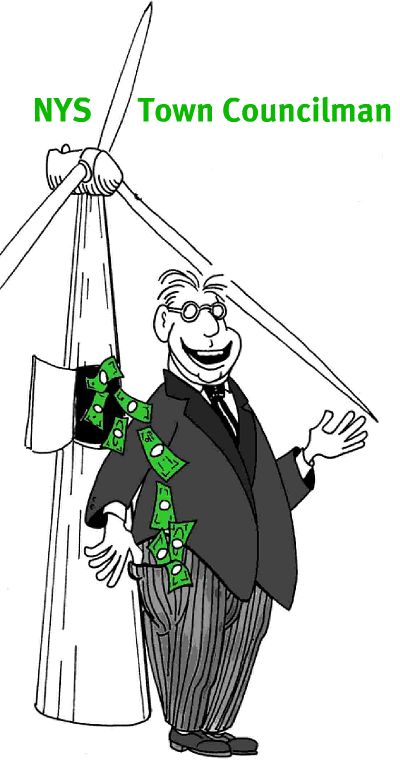 Adapted from a cartoon by Windtoons.com

The following article appeared in the Utica Observer-Dispatch 9-8-08 as an unsigned editorial. RiverCityMalone thinks it’s worth reading.  The lampoon, above, was added by RCM.  The Editor.

Nothing damages the public’s trust in government more than the possibility that elected and appointed officials are benefiting personally from government action.

That’s why New York State must aggressively pursue investigations across Upstate New York into potentially improper dealings between wind-power companies and local officials. That’s why town leaders in Herkimer County and elsewhere must avoid financial connections with such companies. And that’s why state agencies must step in and develop some guidelines for reviewing and approving such projects.

As the nation seeks alternative energy sources, wind power projects are flourishing. They help the nation reduce its reliance on fossil fuels. They provide cleaner energy that can help reduce global warming pressures.

At the local level, however, the scope of such projects can be daunting. Rural towns so small that they lack a full town hall are being asked to decide the fate of million-dollar projects, a process that can include extensive environmental impact reviews.

Those environmental impacts can be significant: The Associated Press reported in the Observer-Dispatch on Aug. 17 how the massive Maple Ridge wind farm on the Tug Hill Plateau in Lewis County north of Utica has pitted neighbor against neighbor, relative against relative, because of the size of the towers and the constant hum of the turbines.

That’s why the last element that should enter into the equation is potential financial benefit for local officials. Yet that’s precisely what’s occurred in multiple Upstate New York rural counties. The Franklin County district attorney received so many complaints, in his county and elsewhere, that he ultimately turned the whole matter over to the state Attorney General’s Office.

At least one complaint has been made in the Herkimer County town of Stark, where one Town Board member and three Zoning Board of Appeals members have signed lease agreements with a wind-power company seeking to build turbines in the town. Town Board member Thomas Puskarenko signed a lease agreement on May 4, 2007, with Jordanville Wind LLC for use of his property for wind turbines. Such lease deals typically bring a landowner a few thousand dollars per year.

Town records show that Puskarenko voted several times to boost the project in the years prior to his signing the lease agreement with the company. Even after that, Puskarenko participated in some votes on the project, and abstained on others. It was not until April 2008 that he formally told his board colleagues that he would stay out of discussions and votes on the wind project because of his financial connection.

It’s impossible to know when Puskarenko first began discussing a possible lease agreement with the developer, but the timeline is troubling. And even when he has recused himself from votes, that can’t erase from his fellow board members’ minds the knowledge that their colleague has a vested interest in the project. On a small board in a small town, could that color a board’s thinking? Certainly.

In the case of the Stark Zoning Board of Appeals, that board has not heard any cases involving the Jordanville wind project, but certainly it could become involved in such a case. What message does it send to residents and project opponents that three-fifths of that board has financial ties to the wind-turbine developer? Most likely that town government is too entwined with the developer to act and think independently.

Public servants fail the people when they make deals with companies or individuals that seek approval for private projects. Such dealings create conflicts of interest for those directly involved, and the appearance of a conflict of interest for the entire town government.

The state must investigate all such conflicts to see if wrongdoing occurred. Local officials must act in a manner beyond reproach by turning down all entreaties from private wind-turbine developers dangling lucrative lease deals in front of them. And the governor, state legislature and attorney general must study this entire approval process so that localities have clear guidelines within which to operate.

Only then can rural residents feel assured that reviews of wind projects can occur without the taint of possible corruption.