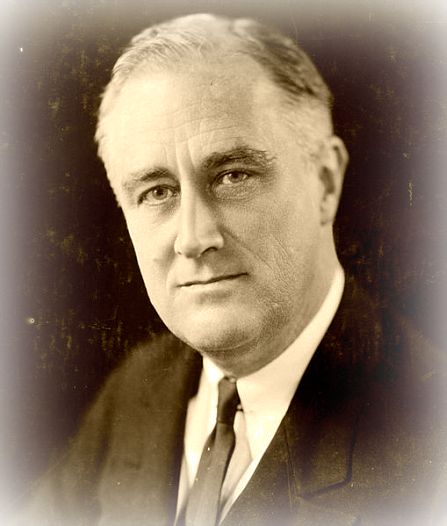 The following article appeared in the NY Review of Books 2/12/09 issue, written by the Pulitzer Prize-winning journalist Russell Baker.  As America plunges into a deep recession which leading leading economists (including Nobel Laureate Paul Krugman) believe could resemble the Great Depression in severity, it’s worth taking stock of the President who grappled with that disaster.  President Obama is reported to be reading FDR’s biography.  Perhaps many of us should be reading this man’s biography.  If there are lessons to be drawn from the 1930s, Baker’s article is a useful beginning for discovering what they might be.  The Editor.

Few expected very much of Franklin Roosevelt on Inauguration Day in 1933. Like Barack Obama seventy-six years later, he was succeeding a failed Republican president, and Americans had voted for change. What that change might be Roosevelt never clearly said, probably because he himself didn’t know.

Herbert Hoover, the departing president, had left behind an economic cataclysm. Since the 1929 stock market crash the economy had been spiraling inexorably downward for more than three years. The country had always experienced episodic “panics” and “recessions,” but nothing this bad. As Anthony J. Badger writes in FDR: The First Hundred Days, “Americans had never been there before.”

Roosevelt’s declaration that Americans had “nothing to fear but fear itself” was a glorious piece of inspirational rhetoric and just as gloriously wrong. Banks across the country had been failing for months and thousands more were on the brink as he took the presidential oath. Unemployment stood officially at 25 percent but was actually closer, Badger estimates, to 33 percent. “Farmers had been crushed by catastrophic price falls, drought, and debt. A thousand homeowners a day were losing their homes.”