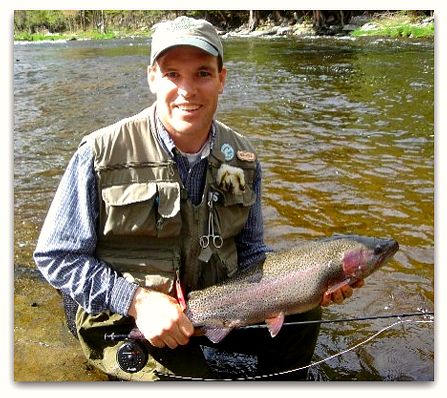 “My father was very sure about certain matters pertaining to the universe.  To him, all good things—trout as well as eternal salvation—come by grace and grace comes by art and art does not come easy.”

—Norman Maclean, A River Runs Through It

“Take a few minutes and read the current,” whispers the guide, leaning over the shoulder of the client. The water’s perfect: temperature in the high 50s, a nice cut-bank on the far side of the stream, a spectacular Hendrickson mayfly hatch just getting going. Trout-rises dimple the surface, the rings of a small wave fade into the current as hungry fish suck up mayfly duns drifting overhead.

A few moments of studying the river, he whispers again.  “I recommend a 7-foot 5x tippet with, say, a size-12 fly imitation.” (Fly fishing lingo.)  Then a smooth cast upstream, mend the line to keep the fly from dragging, and remember to hold the rod tip high.

A fly-fisherman’s dream unfolds on the Salmon River. One of the state’s premier trout streams, the Salmon bisects Franklin County between 44 degrees 30 minutes north and 45 degrees north latitude. Perfect latitude for trout. 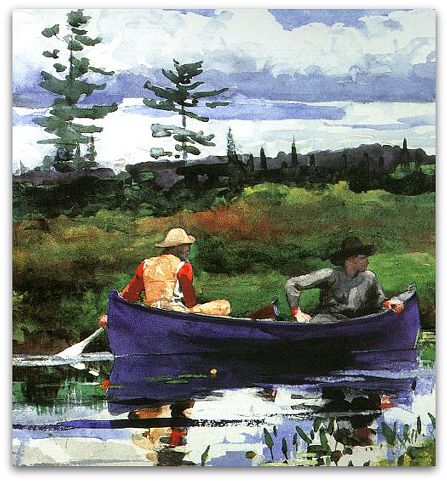 The river originates in the northern Adirondacks, flowing north through Bellmont, Malone, Westville, and Fort Covington before entering Canada near the village of Fort Covington. Shortly after crossing the international border she ends her journey by disgorging into that queen of rivers, the St. Lawrence.

The river gets its name from a bygone era when wild Atlantic salmon spawned upstream. What a sight it must have been! Industry, settlement, farming—the 19th century was not kind to the salmon who for eons had returned from a life at sea to this, their place of origin, to lay eggs.  Dams rendered that great, majestic cycle of Nature all but impossible.

The story is not all tragic, however. Though stripped of its signature Atlantic salmon, the Salmon continues to support a strong and healthy sport fishery

The river is born and begins its tempestuous journey in the mixed hardwood high-country of the northern Adirondacks, a landscape of irregular mountain topography. The best access to the headwaters is by loading a canoe into a dammed portion called Mountain View Lake and paddling upstream. 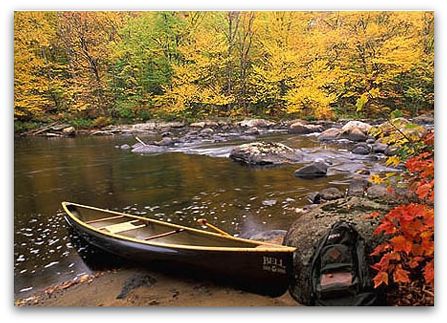 Below Mountain View dam she wanders across a glacially sculpted plain at the base of Titusville Mountain. This stretch tends to be gentle, with many meanders and scenic waterfalls about half a mile downstream of the Barnesville Road crossing. (Don’t miss the views of the Titusville Mountain escarpment while canoeing or kayaking this segment.)

Roughly five miles north of Mountain View she begins a precipitous descent from the mountains to the St. Lawrence lowlands, dropping (at Chasm Falls) a thrilling, churning 900 feet in a mile of horizontal distance. Waterfalls and whitewater make for spectacular scenery and challenging angling.

Below Chasm Falls she continues north through Whippleville, eventually flowing into the Village of Malone just above North Country Community College. The stretch from Chasm Falls to Malone tends to be swift and loaded with boulder hazards. Here at the college the hydro dam creates a small lake (Ballard Mill Pond) for canoeing and fishing. Good for bird-watching, and home to beaver, mink, and muskrat. 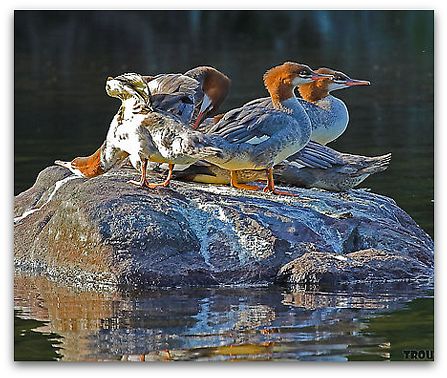 Beyond the college she winds through town, oblivious to traffic lights, crosswalks, the County Courthouse, and whatever else consumes our days, while offering solace to fisherman and swimmer alike—life’s enduring and simple pleasures. At the northern edge of town, Lamica Lake forms the last major impoundment. A car-top boat launch on Lower Park Street gives access to this serene section of the river.

Below Lamica Lake the river plunges into a spectacular gorge carved through sandstone bedrock, flattening out soon thereafter into a lazy pace of meandering, deeper waters. On through Westville, the powerful lateral erosion has created large cut-banks and deep pools for good swimming (ask any kid) and fine fishing. Beyond Westville the current slows further, drifting through miles of farm fields.

Finally, at its mouth (the bridge on State Route 37 north to Canada), the Salmon has matured into a slow, stately stream.

“Keep your eye on the fly,” whispers the guide, the fisherman’s fly drifting toward the rising trout. “Hold that tip high and get ready to set the hook.” In a flash the water ripples and the first catch of the day is hooked. “Give it line and move downstream if you need to.” Suddenly the fish darts across the stream, line peeling from the reel. Then launches into the air, just like in the postcards. 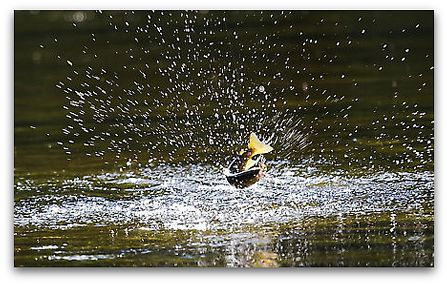 “We wouldn’t call it fishing if it was easy,” consoles the guide, his client carefully working the fly line back onto the reel. “There’s lots more fish in the pool. Let’s put on a new fly. We’ll try again.”

Perseverance is essential in this sport.

The Salmon is without doubt one the finest fishing streams in the state. Deep pools, cool summer temperatures, and abundant insect populations yield superior summer and winter habitat.

The best trout fishing is from Westville south to Chasm Falls. If you’re after native brook trout, I recommend the stretch from Whippleville south to Mountain View. For rainbows, pay attention to the section downstream from North Country Community College. Browns are pretty well dispersed from Mountain View to Westville. The State Department of Environmental Conservation enhances fish populations with yearly stocking of browns and rainbows (check here for stocking information). Even so, the Salmon’s cool temperatures and deepwater cauldrons provide for exceptionally high rates of natural reproduction.

Any seasoned fisherman will tell you that a good measure of a healthy fishery is the diversity and abundance of food sources. Fish food, that is. The three insect species making up the staple of a trout’s diet are stoneflies (Plecoptera), mayflies (Ephemeroptera), and caddisflies (Trichoptera). All three require highly oxygenated water, found only in cool lakes, rivers, and streams with low pollution.

The Salmon has excellent populations of all three. 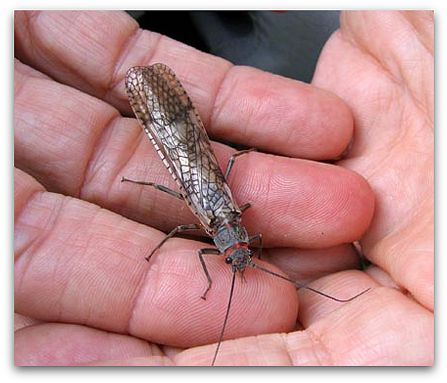 Stonefly nymphs in black and brown are common throughout the river, making up a substantial part of the fish diet. Fishermen hoping to hook into the big trout can try drifting a stimulator in early morning for surface action, or working the bottom with a black or brown stonefly nymph. 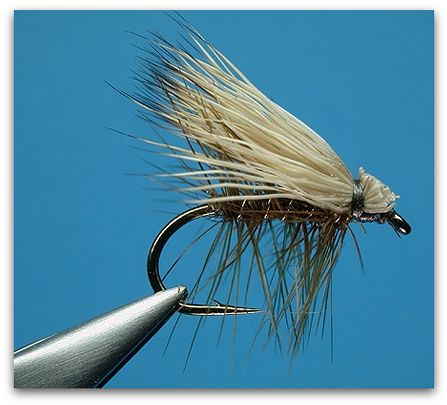 Caddis fly hatches are also thick and frequent. Cream and gray being the most common colors. For the avid dry fly fisherman, an elk hair caddis or emerging caddis provide exciting surface action. Drifting a caddis nymph on its own or as a dropper behind a stimulator works great, too. 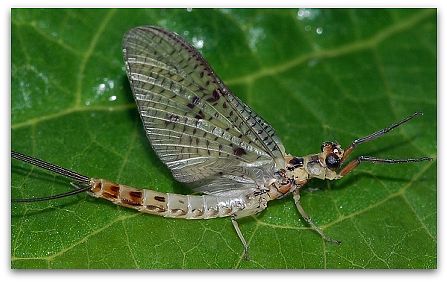 The most predictable hatches on the river are the mayfly. The Hendrickson mayfly is the first major mayfly hatch of the season. (Expect Hendricksons around the 15th of May, usually about 3 o’clock on a sunny afternoon.) A size 12 or 14 Hendrickson imitation with lemon wood-duck wing feathers does the trick. Other early mayflies include Sulphurs, March Browns, Brown Drakes, and Blue-Wing-Olives. Since much of the river is swift, a variety of mayfly attractor patterns work well.  Tried-and-true attractor patterns include the Adams, Ausable Wulff, Royal Wulff, and Comparadun.

Above all, don’t leave home without a collection of wooly buggers and muddler minnows tucked away in the vest. 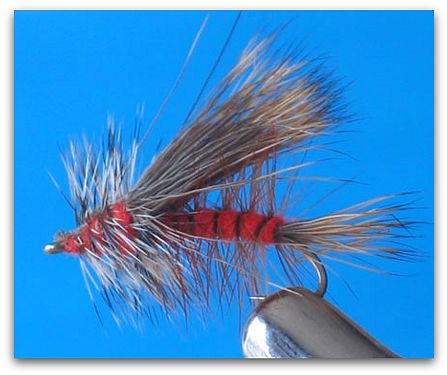 A dorsal fin skims the surface with each rise. “Stay low. Don’t spook him,” warns the guide. Every word hushed. (Fly fishing is a soft-spoken sport.) He slips into the current, 40 feet downstream. Then drops a perfect cast 10 feet above his prey. Slowly the dry fly floats into the trout’s feeding lane. (The idea is to make it appear as natural as Mother Nature. “Mend the line for a drag-free drift.”)

The take was subtle, though the form was one they had seen before. It’s the trout of a lifetime. He lifts the rod tip, sets the hook—and the fight is on. “Hold him in the slack water! Keep the line tight!” Slowly, ever so patiently, working the large brown to a hovering net. 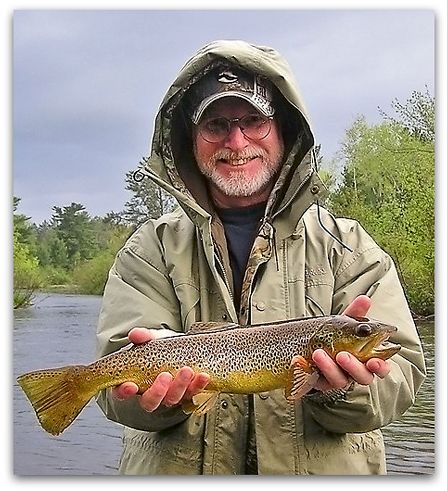 “Snap that picture real quick, and we’ll send him back for another day.” 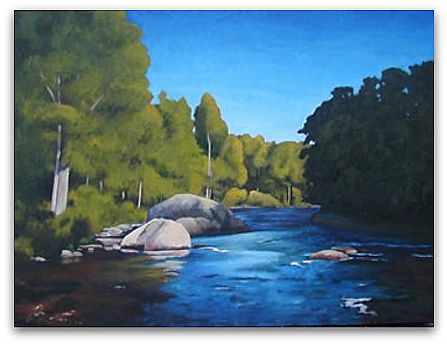 Everyone is welcome to participate in the 2008 Hendrickson Hatch Fly Fishing Tournament, May 31 & June 1, here in Malone.

Tournament registration will run from 8:00 am until 9:45 am at North Country Community College’s Ballard Mill campus. Fishing will begin at 10:00 am on Saturday, May 31st and ends at 2:00 pm on Sunday, June 1st. Registration fee is $30 for adults and $15 for children 12 and under. All proceeds for the tournament will go to the Malone Revitalization Foundation for continued enhancement of the Salmon River.

An awards ceremony and chicken and ribs barbeque will be held at 2:00 on Sunday afternoon at the North Country Community College’s Ballard Mill campus. Plaques will be awarded to the top three winning fishermen, based on the total number of inches accumulated. A plaque will also be awarded to the angler with the largest trout landed and released. Every participant will be entered in a drawing for the chance to win miscellaneous door prizes.

The Hendrickson Hatch Fly Fishing Tournament is a catch and release buddy tournament. Interested anglers may contact John Miletich at 518-483-6333 to register or for additional information.

(Incidentally, be sure to read John Miletich’s “Once upon a time, 500 million years ago,” published in these pages in January 2008.)