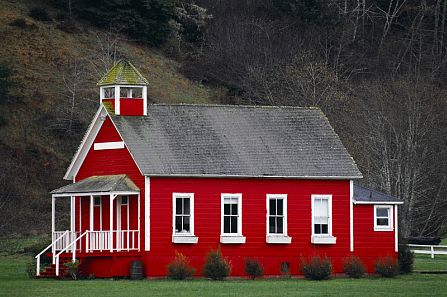 I greet you as one retired teacher to another.  I have a warm place in my heart for all teachers, as I know you do too.  Like you, I consider teaching to be a high and sacred calling.  (Remember that schools began in the Middle Ages as extensions of the Church, and for many years all faculty were clerics.  Knowledge, itself, was sacred.  Indeed knowledge is always sacred.)  I regard teaching as the finest of professions.

That’s why I’m writing about the proposal to overhaul our existing schools (some of them).  An ambitious plan, which comes with a huge price tag.  I want to suggest we rethink this.  As a community:  rethink this.

Before beginning let me say that I think you’re a terrific superintendent, and how pleased I was that you agreed to be taken out of mothballs (?) and returned to the Big Desk.  The school board, on which several of my friends sit, is likewise an outstanding group.

Understand, then, that I have no quarrel with you or the board; in fact I have only praise and gratitude.

That said, Is this really the best time to commit Malone to an ambitious and costly building project?  Yes, I’ve read all of Connie Jenkins’s articles in the Telegram, explaining the math, and how you folks “sliced and diced” the budget (as my friend Carol Hunter put it).

Nevertheless the whole thing gives me the hebejeebies. Consider this editorial in last Friday’s NY Times.

“The economic news, in case you haven’t noticed, keeps getting worse….  We are already … well into the realm of what I call depression economics. By that I mean a state of affairs like that of the 1930s in which the usual tools of economic policy–above all, the Federal Reserve’s ability to pump up the economy by cutting interest rates–have lost all traction….  With no possibility of further interest rate cuts, there’s nothing to stop the economy’s downward momentum. Rising unemployment will lead to further cuts in consumer spending, which Best Buy warned this week has already suffered a “seismic” decline. Weak consumer spending will lead to cutbacks in business investment plans. And the weakening economy will lead to more job cuts, provoking a further cycle of contraction…. The Obama administration will almost certainly take office in the face of an economy looking even worse than it does now. Indeed, Goldman Sachs predicts that the unemployment rate, currently at 6.5 percent, will reach 8.5 percent by the end of next year.”

This was written by Princeton economist Paul Krugman, this year’s Nobel Prize winner in economics.  Krugman, as you know, is a regular columnist for the Times, and for months he’s been sounding alarm bells about the major recession that is upon us.

And consider this, by the Times’s editorial board no less (titled “In It Together”):

“The global economic picture is bleak and getting bleaker. Last week, the International Monetary Fund lowered its estimate for world growth next year to 2.2 percent. Advanced economies will shrink. On Thursday, Germany discovered that its economy was already in a recession. Unless [world] leaders work together, protectionist pressures will mount, deepening everyone’s problems.”

And if that’s not enough to start us sweating, Friday’s Times reported “A Record Decline in October’s Retail Sales.”

“Dragged down by plummeting automobile sales, retail sales fell by a record amount in October, the Commerce Department reported on Friday. Sales were down 2.8 percent in October from September, and 4.1 percent from October 2007 as consumers pared their spending in the face of plunging stocks, rising unemployment and growing worries that the United States was headed into a recession.”

Was it last week or the week before that Governor David Patterson went before Congress and pleaded for a bailout–for NYS.  As you know, he’s called the legislature back into session with instructions to chop billions from the state budget.  Michigan is not the only state in serious financial trouble.  With Wall Street melting down, NYS tax dollars went into free-fall.

Think of Wall Street as our equivalent of Michigan’s auto industry.  In each case a large part of the state’s budget comes from that single economic engine:  automobile manufacturers in Michigan, Wall Street financial houses in NYS.  Notice that Congress passed a $700 billion bailout for Wall Street, so far with disappointing results.  Likewise, Detroit auto makers (and Governor Jennifer Granholm) have approached Congress for a huge bailout.  Experts note that if Congress agrees to salvage Detroit, it will likely insist on a radical overhaul–a fundamental rethinking–of the automobile industry.  Smaller, highly fuel efficient, hybrid cars will likely be required before Congress says yes.

A similar fate seems to be in store for Wall Street:  much more government regulation from now on.  The days of wild and crazy Wall Street financial gambling (which NYS, including the Malone Central School District, benefited from) may well be over.  For good.

Last Wednesday the governor delivered his 5.2 billion dollar, 2-year deficit reduction plan.  Quoting from the governor’s website:  “These actions would produce $2 billion of savings in 2008-09 and $3.2 billion in 2009-10 … across all areas of state spending.  [The] plan represents [a] series of tough choices necessary to address [a] record 4-year, $47 billion budget deficit.”  New York State, he reiterated, is “facing the largest deficits in its history.”

You see why I confessed to the hebejeebies.  In light of this is it not fair to ask, How certain are we that the state will pony up those tens of millions of dollars we’re counting on to complete this plan–or even begin it?  Surely the realistic answer is:  Not certain at all.  Patterson said everything is on the table–all expectations of state aid are up for (doubtless bitter) discussion and possible excision.

In this climate–hurricane?–Betty Little’s assurances of funding are about as certain as the return on the junk mortgages choking financial markets to death.

Let’s take a deep breath.  Maybe go outside and have a smoke.  The governor’s trying to tell us something new, and I’m not sure we’re listening.  So radical it’s kind of hard to grasp at first.  We’re used to thinking in the old mindset–the old paradigm.  The habit of “business as usual.”

Not now.  Kind of like those students at that California college last week who were sitting down to dinner when someone burst through the door screaming, “There’s a wall of fire roaring down the mountain!  Everyone outta here!”

So outrageous it’s hard to comprehend for a few moments. The state’s finances are being devoured by the wildfire of a rapidly advancing recession made even more dangerous–for us in Malone–by Wall Street’s spectacular collapse.  This is definitely not the time to be poring over blueprints for new buildings (and property) to the tune of tens of millions of dollars.

Switching gears, take a look at this photo: 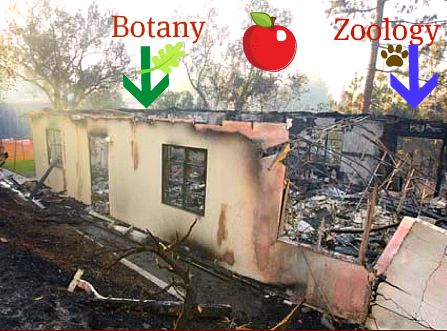 One of the Westmont College buildings that got torched Thursday night.  Don’t worry about the fire; I want you to notice the labels.  Botany & zoology.

I spent four years in this building, learning botany at the left end and zoology at the right.  (The apple stands for “education”:  This building is where I got most of my college education.  A biology major.)

Inside this structure I was taught by the best and the brightest.  Yes, lab sciences.  In fact I was taught so well in this modest building that I scored high marks on the Graduate Record Exam in Biology–was admitted to the University of California in a MA/PhD program in molecular biology–and awarded a Teaching Assistantship immediately on entering graduate school.

All that in this old yet quite serviceable building.  This being my point.  (Obviously you’re not seeing it on its best day, but I assure you it wasn’t in a whole lot better shape even before Mother Nature fire-bombed it.)

Next week I’d like to propose an alternative to the school board plan.  One that invokes the spirit of this simple building, wherein a kid could learn enough science to teach undergraduates at the University of California.