Take a quick look around New York State and one characteristic quickly becomes apparent.  The state, as we know it today, consists of a great variety of landscapes and geologic formations.  As a matter of fact only two states in the entire United States, Colorado and Alaska, have more landscape regions than New York. 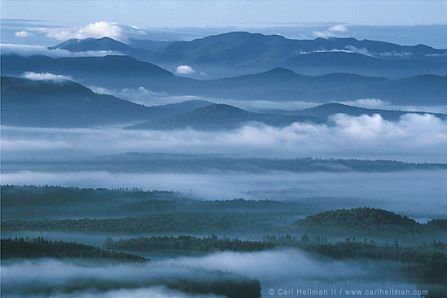 A review of the Landscape Regions of New York State reveals eleven distinct landscape regions within the state.  Each landscape has a unique bedrock structure, erosion history, and changes in elevation.  Additionally, millions of years of uplift and erosion have created a spectacular array of picturesque landforms ranging in elevation from 5344 feet in the Adirondack Mountains to sea level on Long Island.

Aside from a great variety of landscape regions,New York State is also a great place to collect fossils, search for interesting rocks and, if you’re lucky, stumble upon a few gemstones.

Each of these regions holds a unique geologic history.  For most people in southern New York State or from other states, the Adirondacks, a vast expanse of elevated landscape consisting primarily of Precambrian metamorphic rock, are the classic image envisioned when the word North Country is mentioned.  (“Metamorphism” is a process whereby preexisting rocks are changed to a new rock as a result of intense heat and pressure.  Metamorphism does not melt preexisting rock, but causes mineral recrystallization.)

Here we dive into some serious geology—and unimaginable stretches of time.  The term “Precambrian” refers to the time period from the origin of earth (4.6 billion years ago) until the start of the Cambrian Period (544 million years ago).  Life on earth was either absent or, at most, sparse during these billions of years.

Back to our backyard.  The bedrock formations of the Adirondack Mountains date to what’s called the Middle Proterozoic Eon of the Precambrian, forming about 1.1 billion years ago.  (Adirondack bedrock was formed during a mountain building event called the Grenville Orogeny.)  This Middle Proterozoic event buried bedrock of the Adirondacks roughly 20 miles deep, causing intense metamorphism of the existing bedrock.  The current elevation features of the Adirondacks result from a much more recent uplifting event, taking place just within the past 15 million years—a mere second on the earth’s geologic clock. 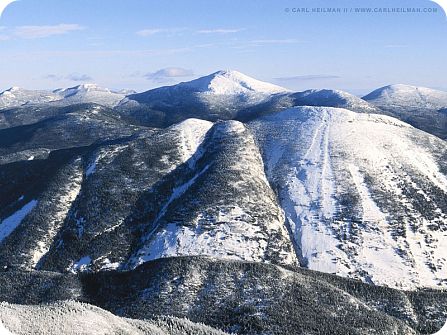 The evidence for all this geologic drama is readily visible by taking a trip to the Champlain Lowlands or St. Lawrence Lowlands, where one can view, and collect, fossils from 500 million years ago—bits and pieces of planet earth’s narrative.

Beginning at the eastern edge of the town of Potsdam the sandstone formation extends to the east and northeast as far as Lake Champlain and southern Quebec.  Scattered exposures of the Potsdam formation can also be observed in parts of Jefferson County and southern Ontario near the Thousand Islands.

Imagine the earth around 510 million years ago (mya), in what’s called the Cambrian Period (544mya – 490mya).  Five hundred ten million years ago shifting continental positions, produced by plate tectonics, caused New York State to be located in a tropical climate about 20 degrees south of the equator.  (Picture continents routinely smashing into one another as they float like dinner plates on the earth’s fluid-like upper mantle.) 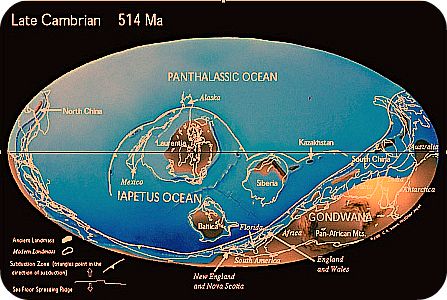 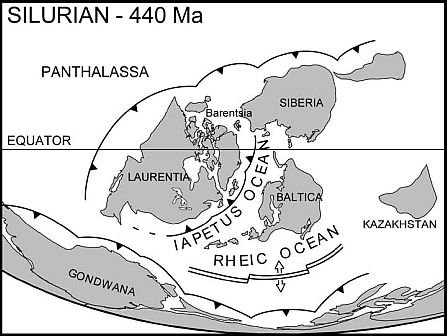 Indeed, much of what we know as North America was under water during the late Cambrian.  Our North Country was a coastal environment.  The sands deposited in this North Country shoreline environment eventually became cemented to form today’s Potsdam Sandstone. 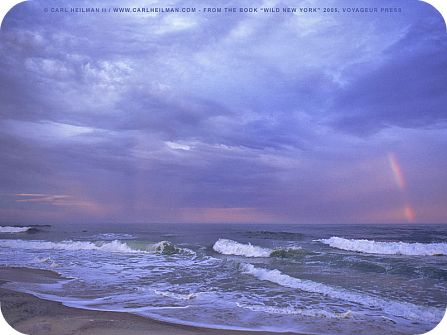 Not only was the landscape profoundly different, but so was life itself.  In fact there was no life that we can detect on dry land. The miracle of life was slowly, quietly transpiring in the vast, mysterious soup of the Cambrian seas.  Here, in Mother Earth’s kitchen, life was just about to take a huge evolutionary leap forward.

Prior to the Cambrian, life in the oceans was rather simple, most animals lacking any hard body parts (shells, teeth, bones).  Fossils, as a result, are uncommon.  All this began to change around 520 million years ago when sea-life with hard body parts (calcium carbonate and calcium phosphate) begins appearing in the fossil record.  Suddenly sea-life became more abundant and diverse with the appearance of creatures we call trilobites, cephalopods, and brachiopods. 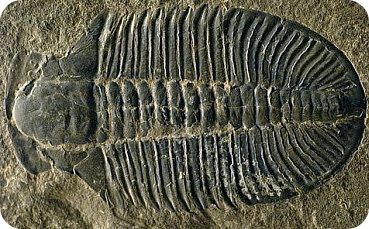 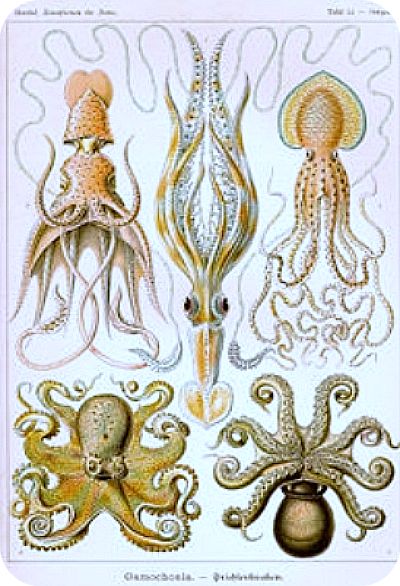 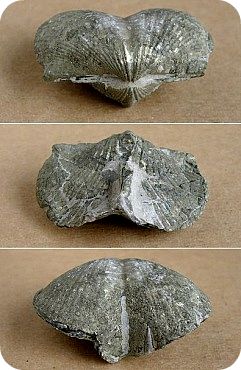 By the end of the Cambrian the world’s oceans would be teeming with these creatures.

A quick observation of the Potsdam Sandstone does not reveal the diversification of life that was taking place during the late Cambrian.  An explanation for this absence of life can be found in the composition of the rock.  The Potsdam formation consists primarily of medium to coarse-grained sand-size sediment held together by cementing material.  The quartz sand grains combined with the cementing material give this rock a somewhat white or dull red color.  These sand grains were likely deposited in a high-energy coastal environment.

Coastal environments are subject to heavy wave action, rip currents, and storm surges.  Such an environment would have been unfriendly to most marine life of the late Cambrian Period.  Any shells that may have washed ashore would have been quickly pulverized by heavy wave action.  That being said, a few locations have revealed some trilobite and trace fossils in the Potsdam Sandstone.

There are a number of locations around the North Country where the Potsdam Sandstone can be observed.  For those interested in local architecture, there are many buildings around the North Country built from this rock material.  Visit the campus of Clarkson University or the public library in Potsdam to view some nice red-colored Potsdam Sandstone.  The Village of Malone also has some great examples of construction using Potsdam Sandstone.  The Wead Library on Elm Street and the First Congregational Church on East Main Street are two fine examples. 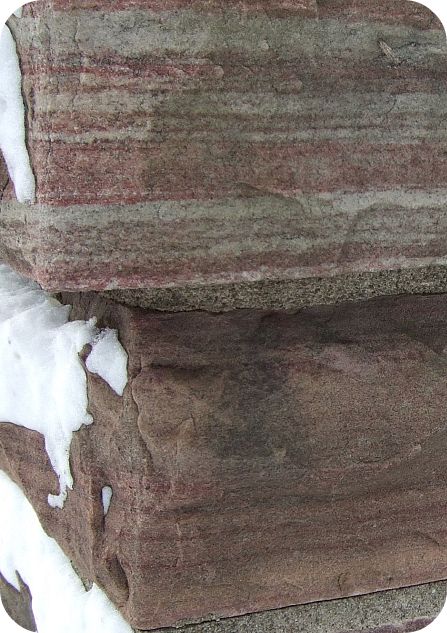 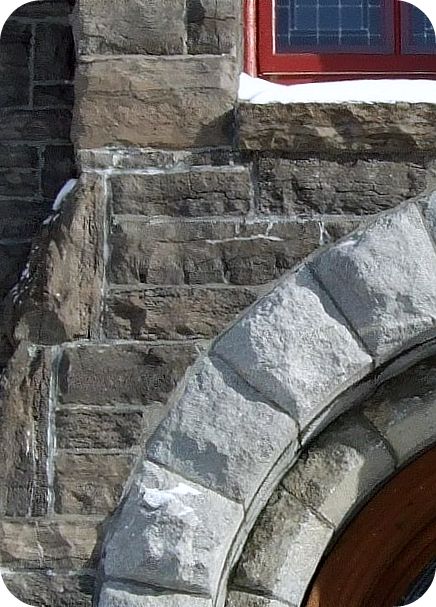 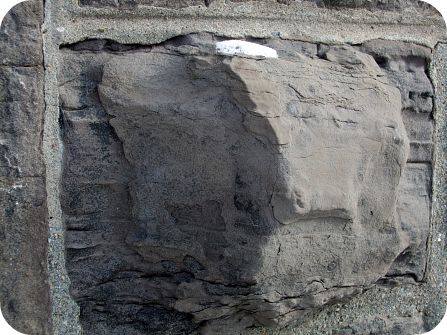 A drive around the North Country will also reveal many homes and old cellar holes constructed of Potsdam Sandstone.

For anyone interested in observing the Potsdam Sandstone in its natural position there are many outcrops and river gorges that show the rock.  Ausable Chasm in Essex County is a spectacular gorge that was formed as the Ausable eroded through the rock.  In Franklin County the gorge below Lamica Lake in Malone is one of the best locations to see the Potsdam formation.  Use caution exploring this gorge; the walls are sheer and the rocks are slippery.

Along the Chateaugay River in eastern Franklin County there are great exposures at High Falls Park.  (Both Ausable Chasm and High Fall Park are held by private landowners and require a fee to see the rock exposures.  The Salmon River gorge is free, but please be cautious; the currents can be strong and footing can be challenging in places.)

There are many publications and educational leaflets that offer an expanded overview of the geologic history of northern New York State.  A couple quick references include: Geology of New York: A Simplified Account (NYS Education Department) and Roadside Geology of New York by Bradford Van Diver.

Perhaps James Hutton (1726-1797), the father of modern geology, puts it best. “I see no vestige of a beginning, no prospect of an end.”  Modern geologists have a much better understanding of the earth’s beginning and tempestuous career than did Hutton, but the general concept still holds true:  the shape of the landscape and life itself are both ephemeral in the forge of geologic time.

I have found chiton shells high
in the mountains, the finprints of fish
in the stonecutter’s stone, and seen
boulders and trees dragged to sea
by the river. Water and earth
lurch, wrestle and twist in their purposeless
war, of which we
are a consequence, not an answer.