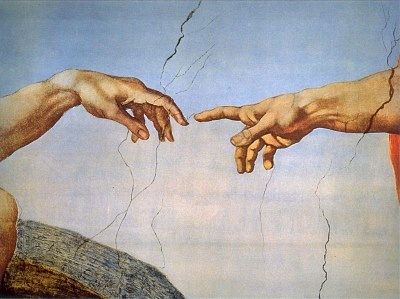 Detail from Michelangelo’s “Creation of Adam,” Sistine Chapel, The Vacitan

The parking lot is empty, save for the Mercedes gathering dust.  The building is dark, as if abandoned.  Nothing stirs.  Sorrow, like fog, silently engulfs the place.

Zukie, I write to you in friendship.  Not as your judge, not as the jury that convicted you.  As a friend only.  I want to tell you I grieve.

When you moved here and opened the restaurant, Nina & I were thrilled.  Villa quickly became our favorite spot to relax after a week at the medical office.  We liked the ambiance, and, yes, we had our favorites on the menu.  You were an ebullient host; it was fun getting to know your clan.  (Who couldn’t like Kembie?)  Suddenly, Malone seemed European.

As the years went by you tackled the The Canyon.  The old business district.  Building by building.  Renovated, spruced up.

I marveled how young you were.  Same age as my daughter.  Bursting with energy, plans.

Then, Harris.  (I can’t imagine losing a child.  I suppose you couldn’t either, but were forced to anyway.)  We wondered how you and Miliya would cope.  You channeled your pain into helping other families.  No one expected this, certainly I didn’t.  I admired your wisdom and humaneness.

Then the stories began.  Perhaps they started earlier, and it’s only that I didn’t hear them.  People you and I respect matter-of-factly telling me reports they heard from young women.  Some, it is said, went to the police and DA, but refused to press charges.  (Why?  Afraid of retribution?  Baseless charges?  Embarrassment?  I don’t know.)

As I said, I’m not your judge.  A year ago I questioned you about the stories, and you denied them as complete fabrication.  Several days before you were sentenced I raised the issue again, more bluntly, and once more you hotly and categorically rejected it.

Again, I’m not your judge, and I’m not about to call you a liar.  What I want to do instead is tell you there’s a perception of you which is alarmingly different from your perception of yourself.  Which is precisely why you’re reading this letter in prison.  A year ago I tried to get you to acknowledge the disconnection between these two conflicting perceptions, for you to do something constructive with it.

You were not interested.  Maybe it’s a cultural barrier between us, or language barrier.  (I suppose the District Attorney would say it’s the ingredient common to all men and women in prison.  A certain tone deafness to the community around them, be it one’s spouse, neighbors, people of the opposite gender, or what have you.)

The pain of your accuser.  The irony is you are a man who has lived through pain—that of a father losing a child, and who knows what you experienced in the ghastly Bosnian War.  As a friend I would ask, “Why didn’t you deal with her obvious pain?”

Let me put it this way.  If my neighbor thinks I’m a jerk (and he does, by the way), then I’m a jerk.  It does no good whatsoever to look at myself in the mirror and assure myself I’m not, for in his experience and perception I am, in fact, a jerk.  Nor does it suffice to tell myself he’s a jerk for thinking I’m a jerk.  Neither response is fundamentally interesting or productive.

So what do I do about it?  I try real hard to see myself as he sees me—and, you know, he’s got a point.  Kind of humbling.

Zukie my friend, I’m going to propose you do something wildly radical:  that you overhaul the perception of you inherent in those stories, and the perception of the young woman whose charges put you behind bars.  Make no mistake, I’m not talking about seeking justice or even truth (whatever that might be); I’m talking about accepting responsibility for someone else’s pain whether you feel you are responsible or not.

It’s a powerful and revolutionary idea:  accepting responsibility for someone’s wound regardless of whether you feel you are in fact responsible.

Now you understand what I mean when I say I’m not your judge.  I’m nobody’s judge.  Frankly it’s not interesting being someone’s judge.  In prison you may feel powerless and helpless.  Don’t be fooled:  you’re not.  You have the power to heal those who look to you in pain, yes, even while imprisoned.  Compassion and healing are never, ever, imprisoned.  Anywhere.  I learned that from a man I admire, St. Paul, who wrote many of his brilliant letters while imprisoned.  (In case you’re wondering, I’m not a Christian, nor am I not a Christian.)

I invite you to respond to me in this forum.  (Mail me a letter and I will publish it.)  I invite other readers to respond as well, though let it be in a spirit of healing and compassion, not cynicism or vindictiveness.

To heal this community’s shared wound.

Agonies are one of my changes of garments;
I do not ask the wounded person how he feels …. I myself
become the wounded person,
My hurt turns livid upon me as I lean on a cane and observe.
…
I become any presence or truth of humanity here,
And see myself in prison shaped like another man,
And feel the dull unintermitted pain.